This week we would like to chat about a topic that was trending a lot during during Early Access, the inventory!  In this journal, we will go through the major changes it went through, and explain in a bit more depth why we made the decisions we made.  We’re also tackling the holsters and quickslots, as you can’t really have one without the other.

The inventory changed radically to meet the needs of the game as it evolved.  As we received feedback from players and changed core mechanics in the game, the inventory and the quickslots needed to adapt to the new designs.  This meant that the story of the inventory is a tiny summary of the entire game’s development.

Back in the early days, the game was a lot simpler.  At the time, the game was looking like it would be a roguelike/survival game, and so we looked around at systems other games were using (Day Z, Rust, Minecraft etc).  At the time, we had relatively short playthroughs in mind - something you could play in a single sitting.

Here is a picture of our very first inventory in 2014 - keep in mind that in early development, programmer art reigns supreme. 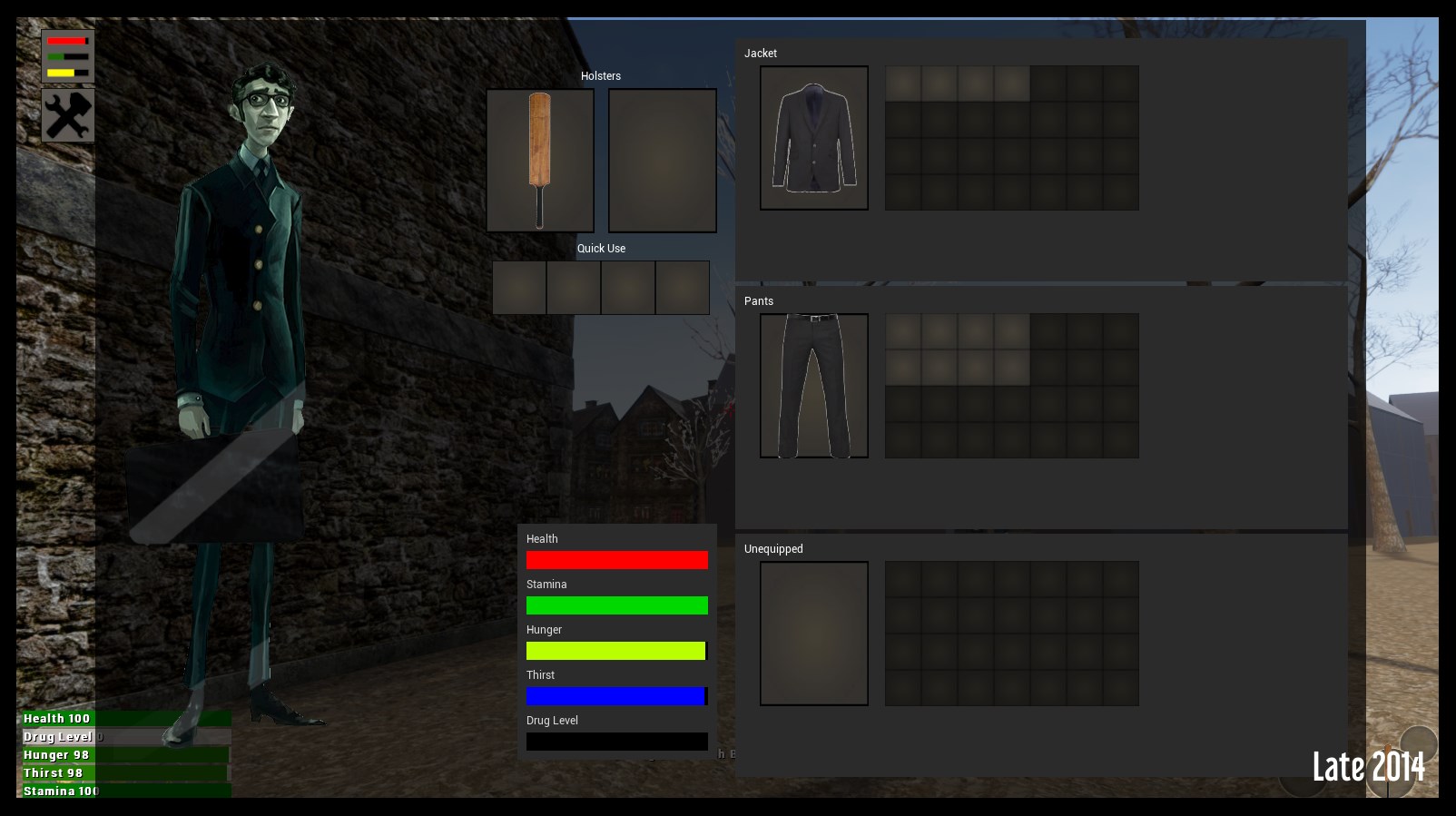 In the first version, what clothing you were wearing would determine how many slots you had available to use in your inventory.  The jacket above would allow you to carry four items and the pants, eight. Finding a better suit would have unlocked more slots etc.  The third slot was for Arthur’s briefcase, which he could also upgrade as you went throughout the game. You could think of it as finding jackets with extra pockets, or suitcases that just got bigger.  At the time, all loot was physicalised in the world.

We wanted to be able to use both weapons and items in regular gameplay, so created a holster and quickslot system that you would use both in the inventory screen and in gameplay.

The quickslots were extremely simple, with two weapon holsters and one quicklsot for an item (food or bandage) that you could cycle using your mouse. The quickslot items would be chosen by hand in the inventory and didn’t stack, which was pretty cumbersome. Naturally, we thought it was great. 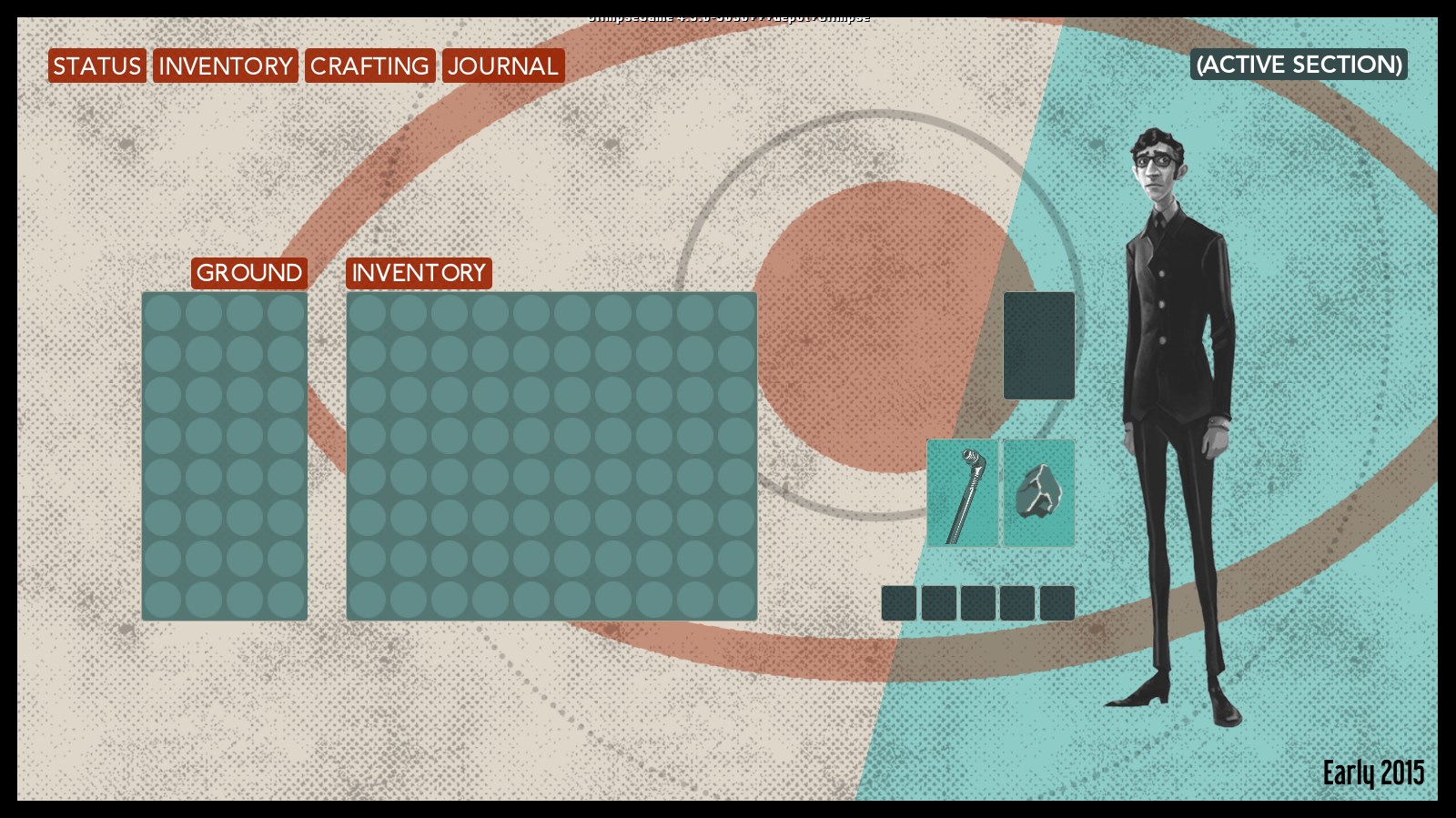 By the time PAX 2015 rolled around, our inventory had gone through quite a major change already: a step closer to what we really had in mind.  To simplify looting and inventory management, we moved to a single, unified inventory - ditching the fixed slots system for a grid. Clothing no longer gated the inventory size, but instead became fully about conformity and other modifiers (which remains the case to this day).

NPCs, the ground, and chests were now containers - aka loot was no longer restricted to being physically in the world, and NPCs (or containers) could have “inventory”. This was represented in the left panel above - you could open this via looting prompts or by just going into your inventory. We also moved “player menu” categories to the top, as opposed to on the side of the screen.

We still had two weapon holsters, but added an extra quickslot.  Throwable weapons had been added by then, and took up a weapon slot. 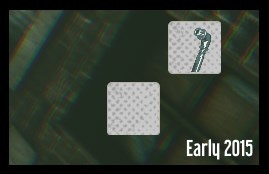 The in-game quickslot became smaller and cleaner. One for a weapon and one for an item. This horrible programmer art remained in-game for YEARS.

Progress continued throughout 2015, expanding on the system. 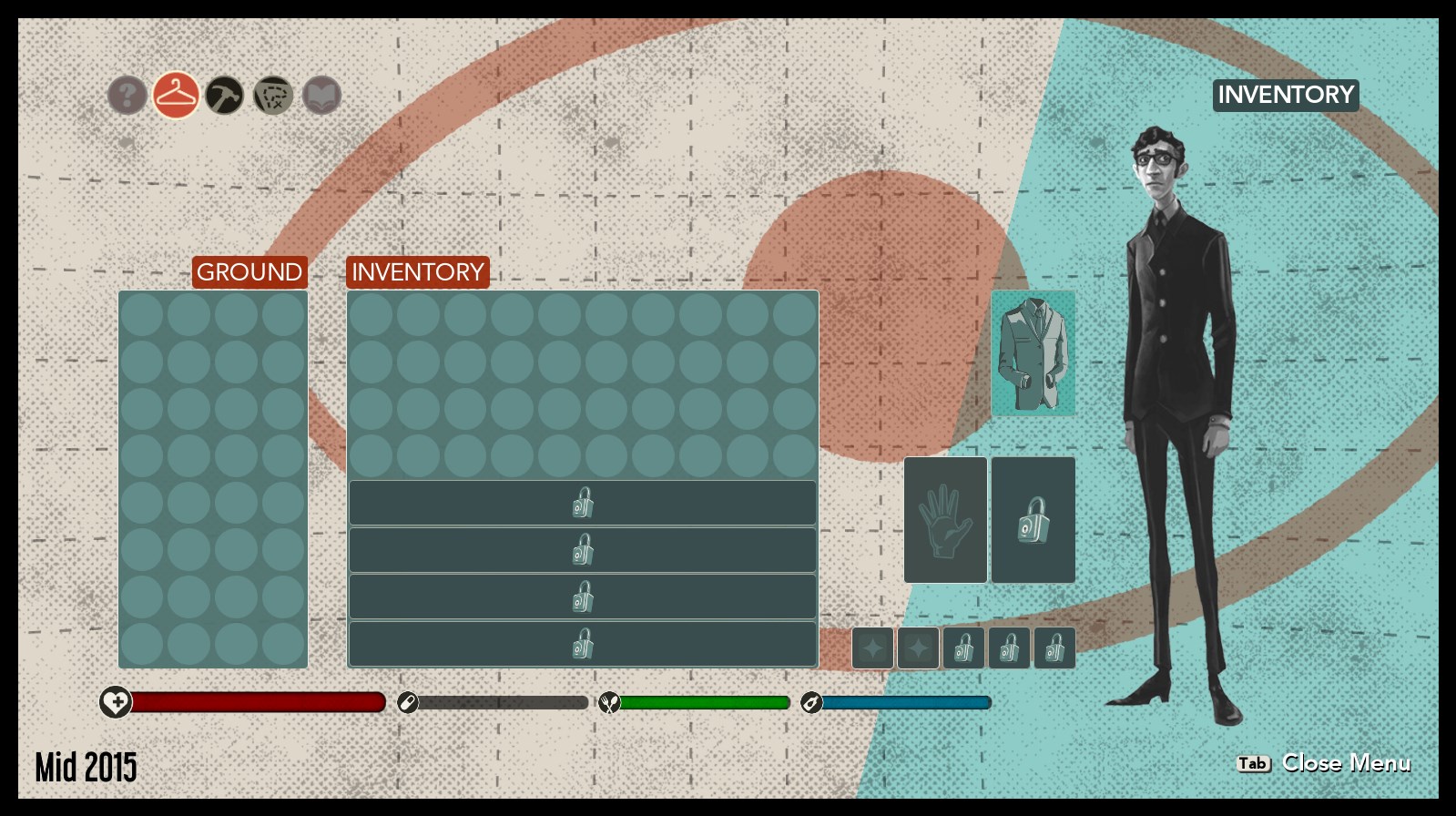 For the Kickstarter playable build, the gating returned not only for the inventory but for the weapon holsters and the quickslots. The player could find expansion kits (briefcases made a brief comeback!) around the game to unlock them.

The survival meters were also now present in the inventory because we didn’t have a status screen yet.  The player menu screens are now icons, instead of names. 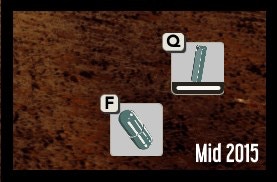 The quickslots did not change much apart from getting button prompts - we started turning more and more attention to how we communicated things to the player, rather than just building systems (that we already knew how to use).  We also added durability for weapons, and weapons could no longer be swapped in the middle of combat, which meant that getting that holster upgrade became more important.

At the time, the game was still supposed to be a relatively short duration.  However, once Kickstarter players got their hands on this build, we realised that everything would need to change.

Throughout the remainder of 2015 and early 2016, we began substantially changing the game.  The community’s response was super exciting, but we realised that a lot of the assumptions we had made were wrong - people were happy with the gameplay but what they REALLY cared about was what kind of story we could tell.

This brought about a very significant change where we started adding a lot of character, love, and story into the game.  This also increased the average playthrough/run time substantially. 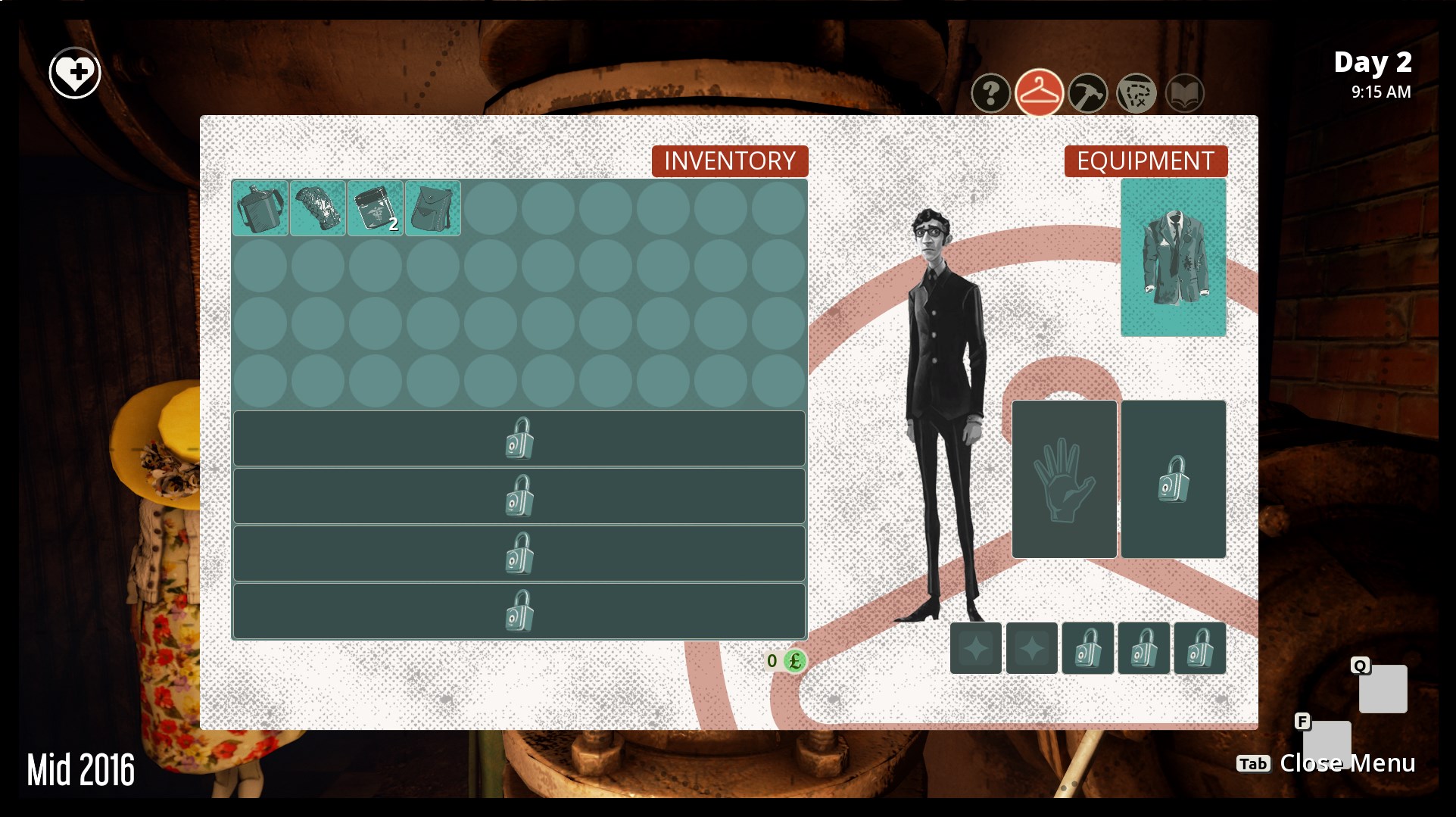 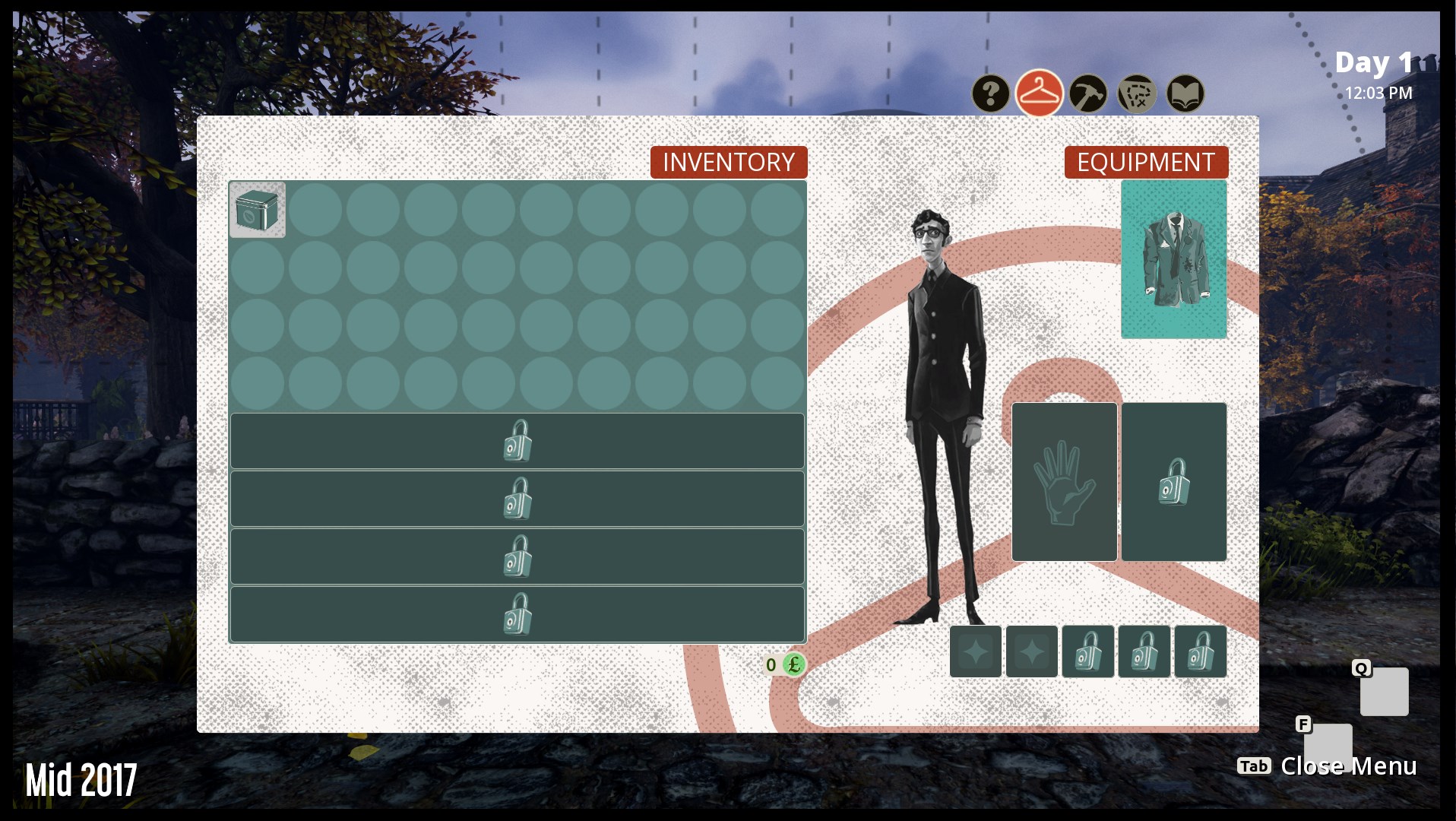 For Early access, we decided that we did not want the game to pause while in the inventory.  Gameplay wise this would add a layer of pressure to the player, for a more hardcore survival experience.  After all, we really wanted our game to be about paranoia.

However, the initial Early Access feedback told us two important things:  inventory management was becoming a chore (a side effect of adding more and more craftable items and things to use in the game), and the number of hardcore survival fans in our audience was dwarfed by the number of people who just wanted to be in a cool world.

Nothing changed for the in-game quickslot.  However, with the expansion of useable items, the criticisms about inventory tetris applied to the quickslots too.

The current Early Access build (Life in Technicolour) is our attempt to solve these issues, and another huge turning point in the life of the inventory. 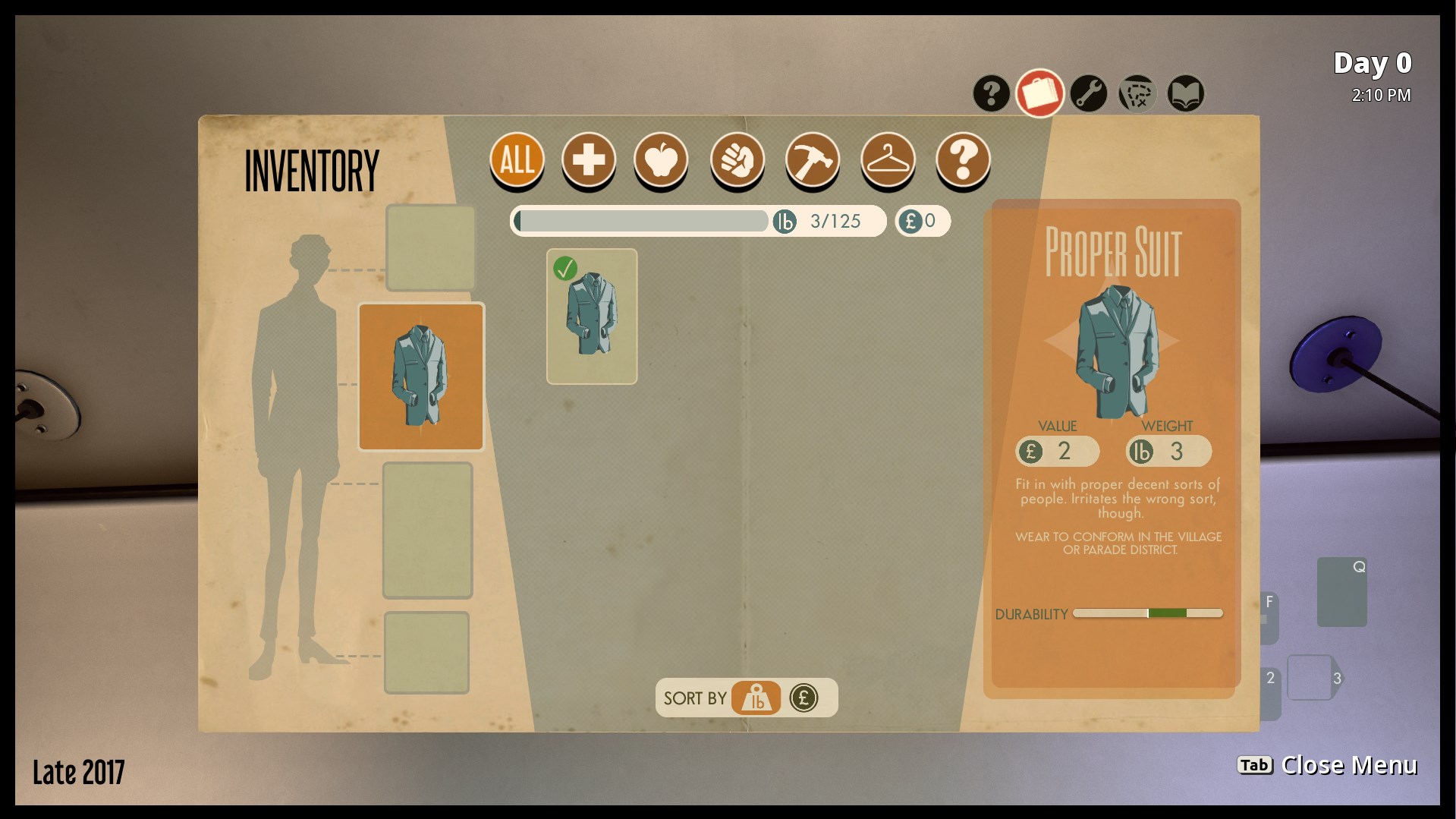 By the time this update came out in mid 2017, we had been in Early Access for over a year, which means plenty of discussions with the community had happened by that point. We heard all kinds of feedback about the inventory but one was truly prominent, players were spending too much time in their inventory organizing it. Some loved it - they loved to organize things exactly the way they liked it - but many more players hated it. Inventory tetris just isn’t that popular. We knew we had a choice to make, because the game length was increasing - we didn’t have bite sized playthroughs any more. We Happy Few was looking less like Day Z and more like an rpg.

Based on the feedback above, we felt that players were spending too much time in the inventory instead of the game. So, we bit the bullet and moved onto a weight based system. That makeover was so drastic that we had to make a video explaining it at the time.

Aesthetically and thematically we finally had time to do what we wanted - it took a long time to plan, but we were happy with it. We added filters to the inventory and now had room for item descriptions, so players could sort their inventory and learn what items were a lot more easily. We were also able to add quest items as undroppable (and costing no weight), which allowed us to avoid a ton of pesky gamebreaking bugs. 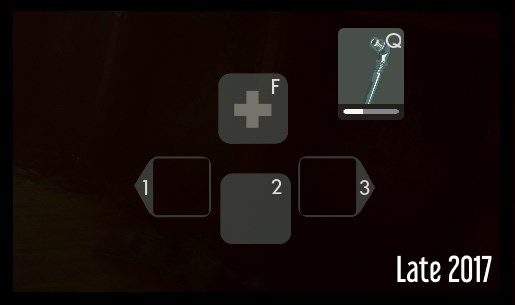 The quickslots got their first overhaul in a while. We experimented with autopopulation of quickslots - the top slot would automatically choose a healing item, and the bottom one autopopulated with all tools you could use (and you could cycle through it).  We thought you’d urgently need health, but maybe not other things. The weapon slot would also autopopulate with the next weapon once it got broken.

The new system has been the subject of a lot of discussion.  Players were frustrated at not being able to see very many items, but otherwise it received a lot of praise.  Some players didn’t like the new quickslot system - the health slot was too inflexible and the tool slot was too flexible (too many choices).  We have adapted the system to reflect that feedback, and here is where it is today: 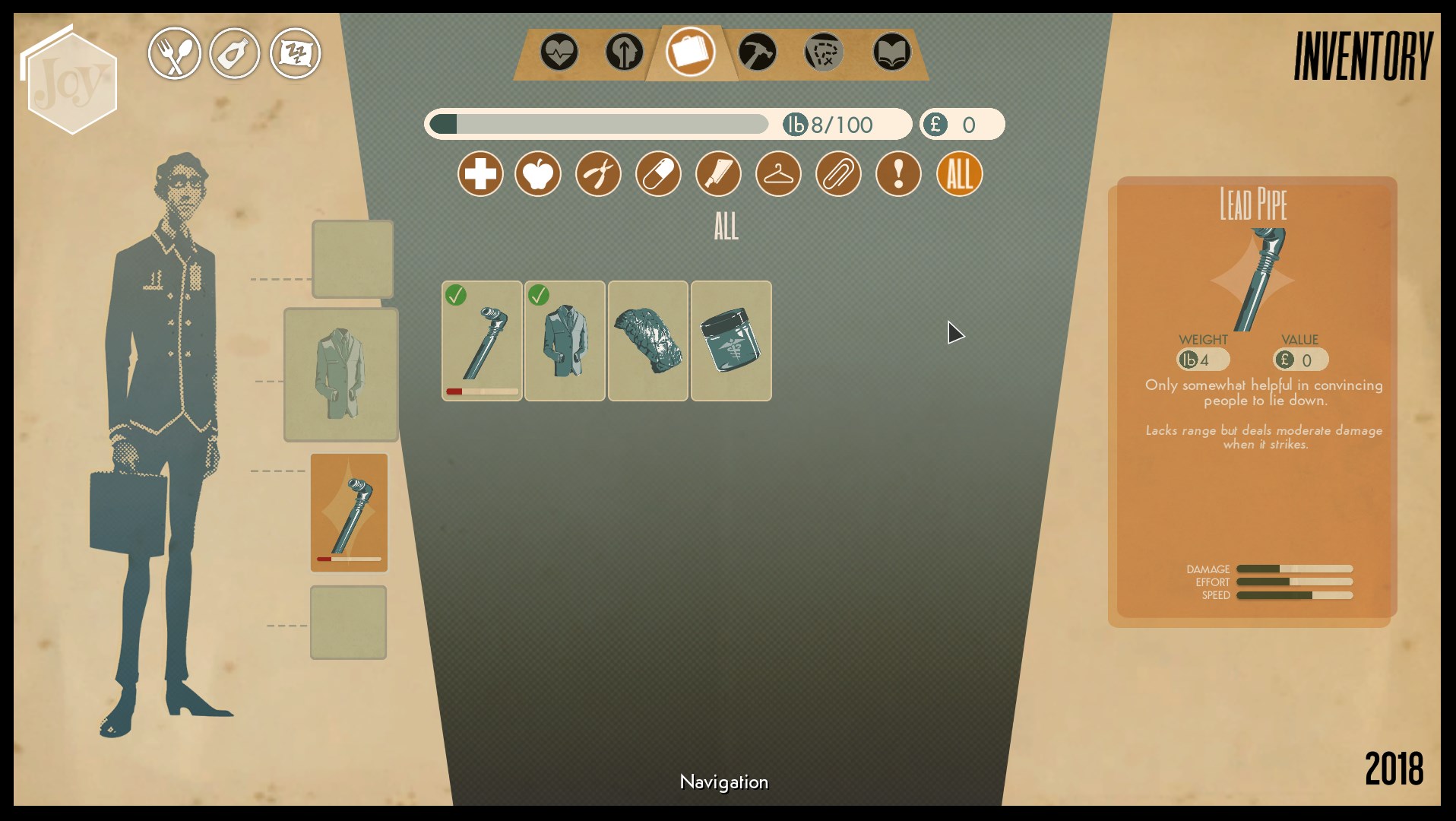 For technical reasons, we decided to revert back to pausing the game while in the inventory.  While not pausing did bring tension to the game, it also could create a significant number of issues.  We realised that restricting weapon/armour swapping would do the job well enough. As a result, we felt like we no longer had a reason to see the game world in the inventory, so we moved back to fullscreen. This solved a few issues automatically, such as the amount of items that could now fit comfortably on screen.  We kept the status icons in the top left, but overall we think this is now in good shape - although we may still make some minor tweaks as we approach release. 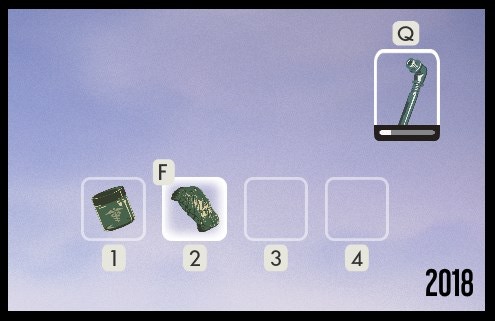 The most recent quickslot system also had refinement - we wanted to keep the autopopulation, because we believe that convenience is more important here than urgency, but improve how it works. There are now (again!) four quickslots, which are autopopulated and each can be cycled through individually. The categories are healing items, survival (such as food and beverage), gadgets (rocks, distraction devices, and the torch), the last one for Joy and other drugs. These categories are matched by new filters in the inventory, so you can see easily what is populating in each quickslot.

And that’s it! This, plus some polish and minor improvements, will be the inventory and quickslot system that we ship with. It feels pretty good to play, and we hope you all agree.