There are good things about having your office in an old gramophone factory. For instance, we can find inspiration for We Happy Few props from the 50+-year-old models of radios and TVs that are exhibited in the lobby of the building, or our neighbours will all be creating cool stuff. There are some drawbacks though, like the fact that proper window sealing did not exist when they built the building and so everybody in the office who’s sitting next to a window is freezing their… fingers off, as first snow and cold temperatures are already here.

Last weekend we shared a booth with our friends at Red Barrels at the MEGA MTL event. For those who are not local, this is an exhibition mainly for independent developers. Thanks to everyone who showed up! We were happy to see so many people. The event grew dramatically this year, and we can’t wait to see next year’s edition. 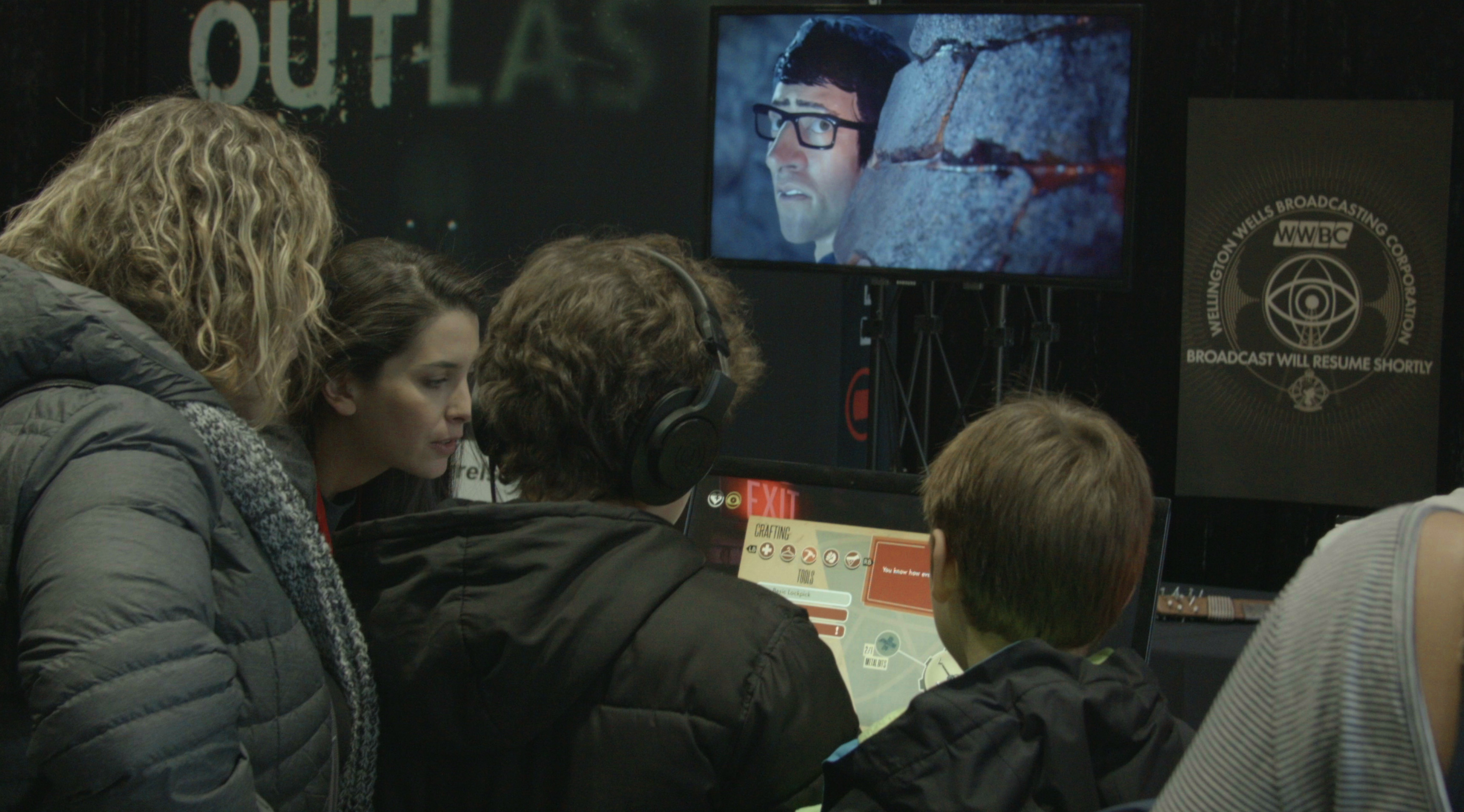 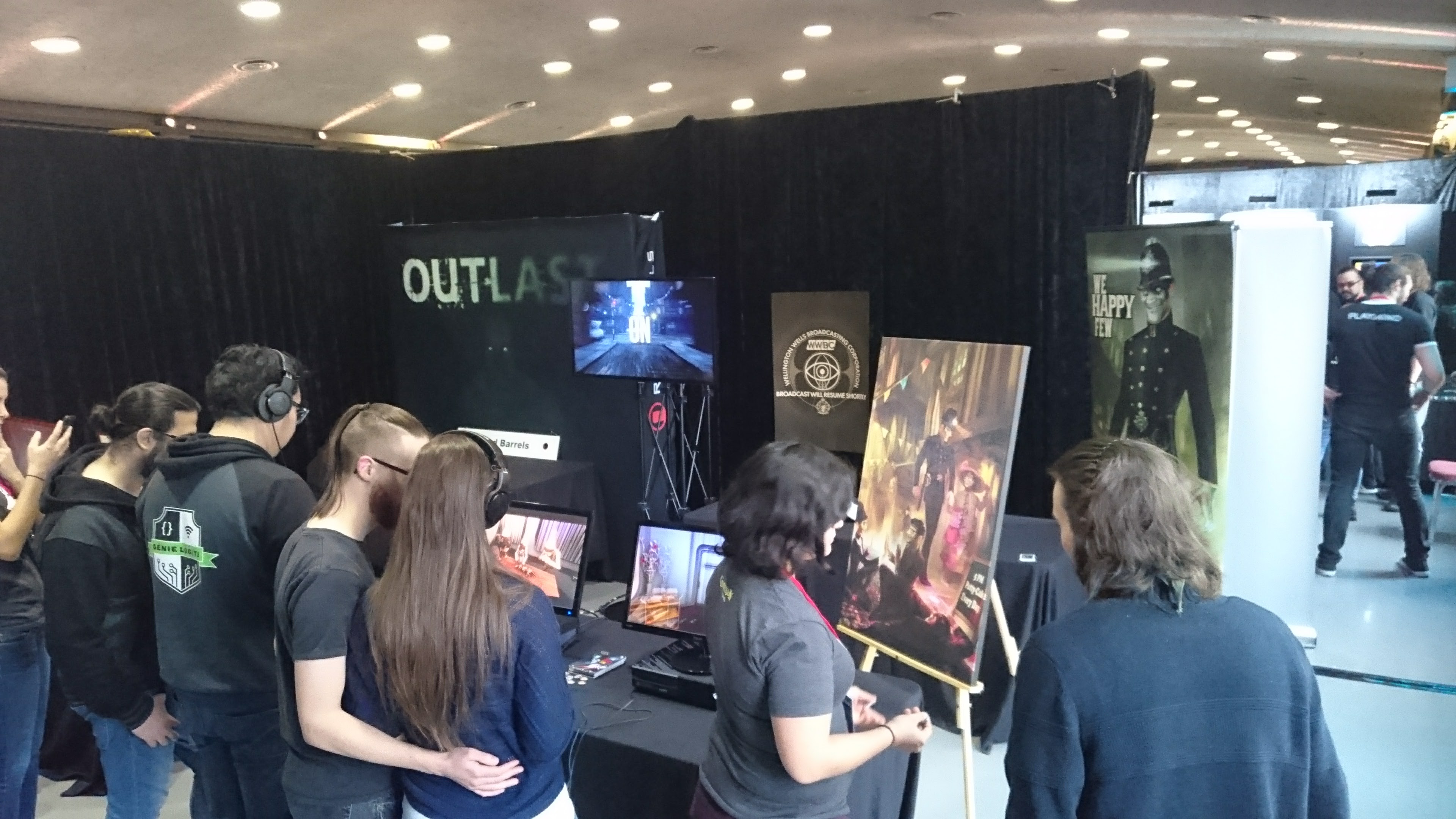 Hi folks! This week, Guillaume and I flew to Los Angeles to finally sign the movie deal for We Happy Few. We announced this back in March, but the long form agreements often take months to iron out the little details, all the while work on finding a writer, financing etc continues. So finally signing is an exciting milestone for us as a team, and for G and I personally after working through some tricky licensing details. You should all be aware that there is a good chance that the movie will never see the light of day (many more projects are “optioned” than actually get made), but we are very proud of the team for creating something that people outside the industry think is cool.

In development news, we’ve finished our first round of reviews on the game. The vast majority can be completed without debug (eg cheats), and we have all our AI archetypes running around. However, we need to improve Arthur’s and Miss Thigh High’s flow - this means we need to go back to the drawing board on the first couple of hours of Arthur’s playthrough, and create new content to make sure it’s a really great experience. If the first two hours isn’t good, it won’t matter how good the rest of it is. This is a pretty big deal, so we will keep you updated (eg Lisa’s post below explains a bit about how important it is to introduce both mechanics and the various parts of the world).

Hey folks! Hope you all had a wonderful week! I’ve been introduced to something called the ConPlague. Apparently that’s a thing - getting sick after running a booth at a convention. Anywhoo, this week I worked on another cutscene. Our poor characters are getting abused in new and creative ways! (I kinda secretly enjoy coming up with new ways to mistreat them). So this week involves some doctors using Arthur as a pincushion. Think Mia Wallace getting revived in Pulp Fiction. So yeah, good times! That’s it for me this week! Tune in next week, same Bat Time, same Bat Channel!

Hi ! This week, I’ve had time to go back to combat! One aspect of our combat circles that wasn’t working right was the supporting NPCs (NPCs that are hostile but just out of reach) weren’t threatening you very much. So, I created a new taunt for the NPCs:

Also, as part of our reviews of combat, we want to create some communication between NPCs during the fight, to help make it feel more coordinated (rather than just a group of people randomly beating you and ignoring each other). So I am currently working on a few feint and communication reactions. I will keep you updated about that next week because we need to run some tests before it’s final! See you next week everyone.

Big week on the balancing side! First, we adjusted all our shopkeepers with new loot tables - in Early Access we erred on the side of making things available, but now that we can play through the game in its entirety, we can start to understand better what you will need at certain times.

We also removed a very important component of recipes: they cannot be unlocked anymore by finding ingredients. We used this system in Early Access because it was the most efficient way of making sure recipes unlocked as we were building them - we wouldn’t have to rebalance recipe unlocks with every update. However, finding common ingredients such as metal bits would unlock 10-15 recipes and that was getting out of control. Now recipes will be found in shops, as quest rewards and on crafting stations when you find them (meaning that finding crafting stations in the wild has much more value). New wearables were also added, mainly for your character’s feet comfort! ;)

I’ve been fixing a ton of bugs on the Mad Scotsman’s playthrough, and reworking a few of the more important missions, particularly his intro sequence. We want to make sure that each new character’s introduction hits the level of Arthur’s intro, both in terms of creating something engaging and teaching you what you need to know about that character. I also made slight changes in the flow of the levels, to either speed up or slow down the action.

Our charming, delightful (especially under Joy), islands can be sometimes a bit empty. The wild areas are not very well distributed - Early Access players will be familiar with big stretches of meadow and forest that don’t have much in them except for berries.

We had two problems to solve. First, there are tiny hamlets made of 4 or 5 houses that are supposed to provide the player with loot and side quests but they are not very well identifiable and too sparse. The player tends to simply not see them and go through them. Second, the way we connect those tiny hamlets is not ideal and creates loooong roads between them.
This week, I tackled the first part. Now, those areas have a central place with the four houses knit together and the side quests are around in a spiraling fashion. It is much more readable and at the same time more compact, making the islands smaller.

This week I have completed the features related to the Doctor (can’t wait for you to see his resurrect unique ability) and moved onto NPC search behavior. While that effort is mainly for the soldiers archetype (surprise), who need to be more relentless in finding the player than other NPCs, the coordination between the members of the search party will be beneficial to other NPC archetypes too.

It’s really motivating to see all those archetypes getting personality over the course of development!

It was nice to go along to MEGA on Saturday and see plenty of cool games, and also talk to some nice people who were interested in We Happy Few. It’s always great to see people playing the game. It’s easy to forget that we already have something that people are enjoying, and to know that we’re improving on that is pretty motivating.

The wheel of fortune that controls my tasks landed on Combat this week, another of the core gameplay systems that needs some love. The goal this week was to improve the way the combat ring works - aka the way we distribute NPCs when they’re engaging you. The way the NPCs surround you when you’re in a fight has a lot of design requirements:

To start with I have changed the pattern to make it so that more of the NPCs position themselves in view, while still making sure the ring doesn’t have big holes in it. I will make sure they move to block you if you try to run away, picking your timing and utilising the shove move will still be a useful tactic, but it should be harder to run away unscathed unless you’re good at it.
For some reason NPCs had stopped blocking as well, which was making combat too easy, so I have fixed that, and I want them to come to each other’s aid if you really start laying into one of them. 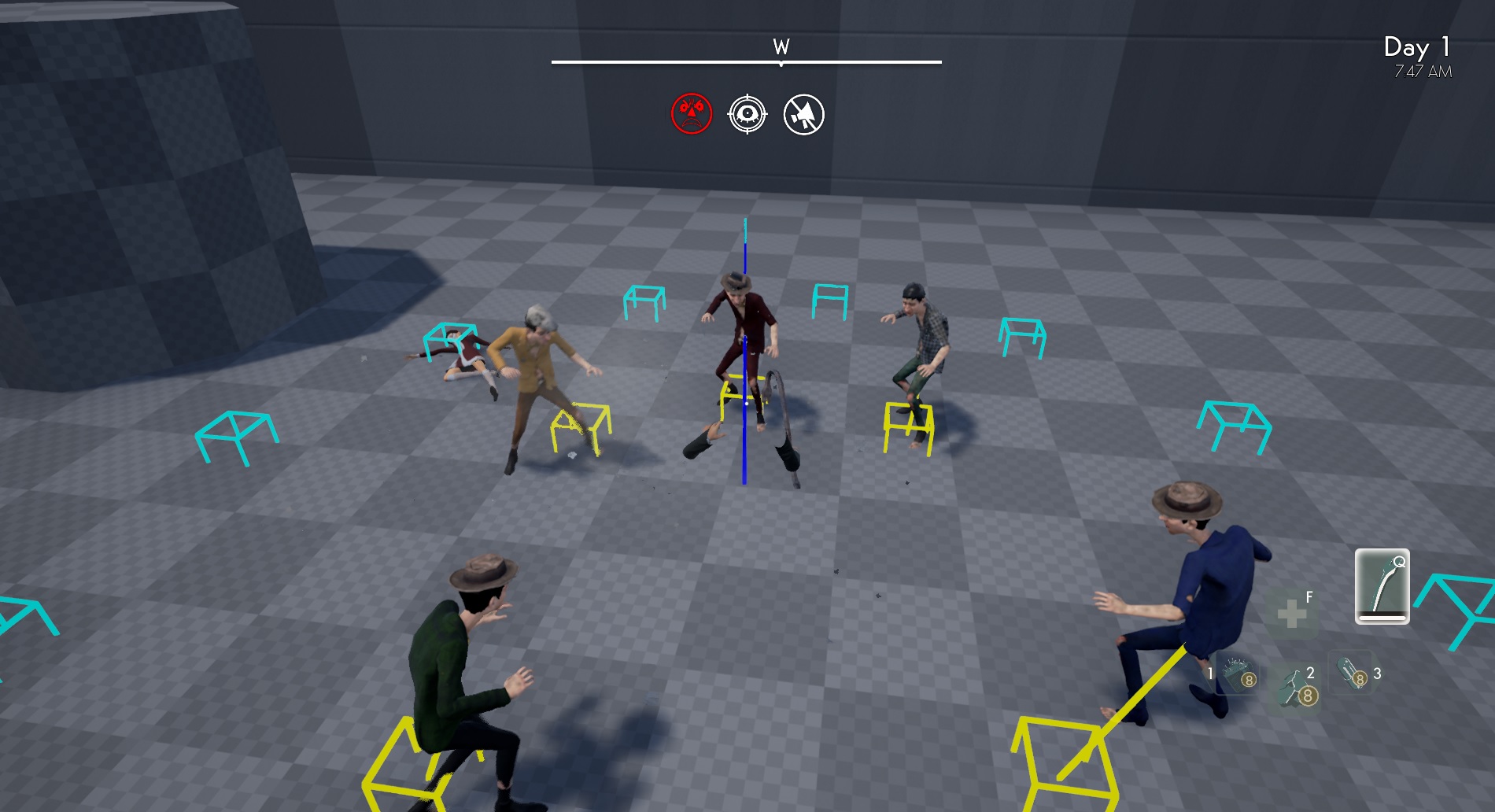 We are continuing our artistic efforts to refactor the procedural system in the Garden District. We are happy to see that our new roundabouts and buildings works seamlessly together. We still have a lot to tackle, but progress is very encouraging. 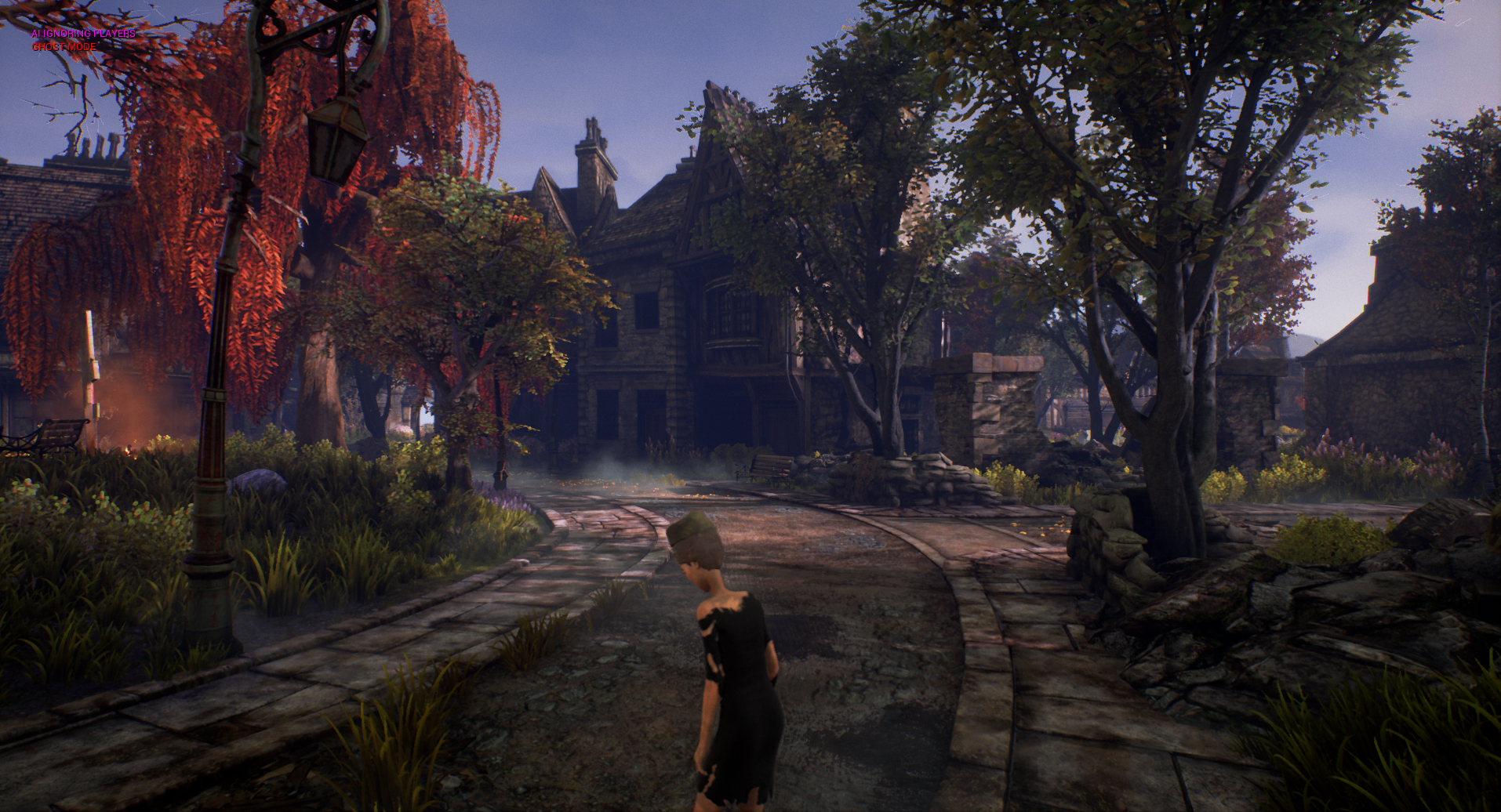 I’m working on environmental narrative for a new location that will orient players to the world of the game. So I’m having to think about a world I’ve been immersed in for over a year, from the perspective of a newbie. Fortunately, we’ve had great fan feedback about what is unclear or confusing, so that’s immensely helpful. Thank you!