Really busy week here at the studio as the team is finishing most of the content for the game. We are also adding 3 new members to the Compulsion family next week! Which is really exciting but it also means the office is currently really noisy due to all the desk building. Today’s journal is a bit special as we are showing a little snippet of someone we’ve never shown before!

By the end of the day today, or maybe squeaking into Monday next week, all of the levels (gameplay areas) will be blocked inside the game. This means, for the first time, we are able to play through all the stories of all three playable characters - all main quests, all side quests, all bridges, all houses, etc - basically, all of the encounters we have in the game. There are no bells and whistles - these are just the basic building blocks - but you can play everything (in theory).

We still have a few things to do - eg bits and pieces of Arthur’s story that aren’t able to generate in the world yet (they’re too big so they blow up the world generation, meaning we have to specially test them) - but by and large this is a very exciting milestone. After 3.5 years, we’re very, very happy to be here!

The next step for the project is content complete: aka, integrating all our cutscenes, VO, art, animation and sound/visual effects. We have six weeks, in theory, to go until we’ve got all of this done, and it’s going to be a whirlwind. It’s exciting, because this is the time where it all starts coming together.

In other news, we are extending the office on Monday - cutting a door into what previously was a wall and adding 25% more office space - and doing a lot of rearranging of desks and teams today. We’ll post up some pictures next week.

“Dangerous” Mike (kind of still new, but with just enough experience to be dangerous)

Hey there! So this week I wrapped up the animations for a quite cringeworthy way of getting things out of the inhabitants of Wellington Wells. Think of going to the dentist who’s only got 3 fingers on each hand, has the shakes and doesn’t believe in anesthesia. An interesting experience for all I’m sure! Check out the GIF for the full experience. So yeah, that’s about it from my end of things. See you next week, same Bat Time, same Bat Channel!

Hi, folks! For me, I spent my entire week on an awesome task! I created a few new attacks for our NPC's combat system. So now all of our NPC's have 3 different levels of attacks. The "light attack" which is already in the game. The "medium attack" and the "Heavy attack". As you can imagine the medium and the heavy attacks are slower, but they do more damage. But an animation is worth a thousand words.

Unfortunately I can’t share something now, because all of these animations are very rough. This is very exciting, see you next week for more news (and gif) about it.

I’ve been out of commission on the weekly a bit, because I’ve been a bit too much in commission writing lines. As the Level Designers rush towards content lock, they are finally spitting out the heaps of encounter lines they need, which I am turning into dialog, and then recording. So that’s a lot of writing and a lot of recording.

That’s a full time job. Another full time job I have is testing the story playthroughs. They are still not 100% complete, but they are complete enough that a fellow can play through them... and make copious notes on all the things that are missing, or scrambled. It took three days for me to play through Arthur, even cheating to give myself lockpicks and power cells and such, even not doing side quests. When we started out, the idea was a playthrough was four hours. Hah.

Odd writing note: sometimes you come across illogical things in the game. For example, for design reasons, Miss Thigh Highs currently can’t go out her back door, even though Arthur, in his play through, goes in that way.

However, you do not necessarily need to justify them. Sometimes it works just to “hang a lantern on them.” If Miss Thigh Highs says, “What is wrong with this door, it’s always jamming on me!” then it feels like there is an in-world reason why she can’t use that door, even if we don’t get a terribly good explanation for it. By addressing the problem, it doesn’t feel as much like a logical inconsistency.

Oh, and, we’re working on a new trailer. So there’s a bit more writing.

Ever wonder what the Doctors do in their spare time? Well, you’ll soon know! This week I wrote environmental narrative for their house, which interestingly used to be a house for something else -- something else that no longer exists in Wellington Wells. Shhh! Can’t wait until you folks see the entire game so I can stop talking cryptically!

Well, last week to stub or rough in encounters and everything seems to be going mostly ok. Have been working on story missions I can’t talk about, but the big one I am doing atm I think is going to be really cool. Some Evel Knievil type stuff.

I have been working the entirety of this week on the new house that is going to be very special and fancy. While I can’t show the level (since it’s linked to the story), I can show you a picture of the wood paneling I have created for the interior ceilings. We usually do something very simple for ceilings, but for this location we wanted something more fancy and elegant. It can be tweaked in-engine so good/gold colors and reflections can be completely different (even independently) depending on the effect we want to achieve. 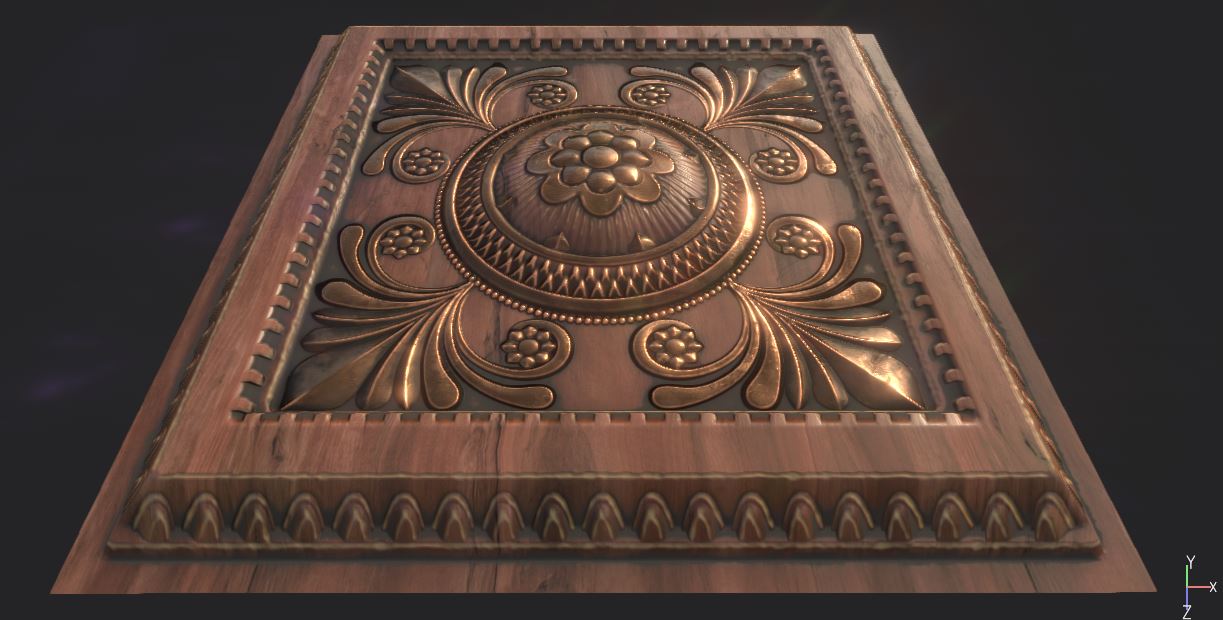 This week I redid entirely the Shell Menu map and character selection with the new buildings, props and also it’s a great opportunity to rework the look and feel of the village we want for the final release! So far so good! 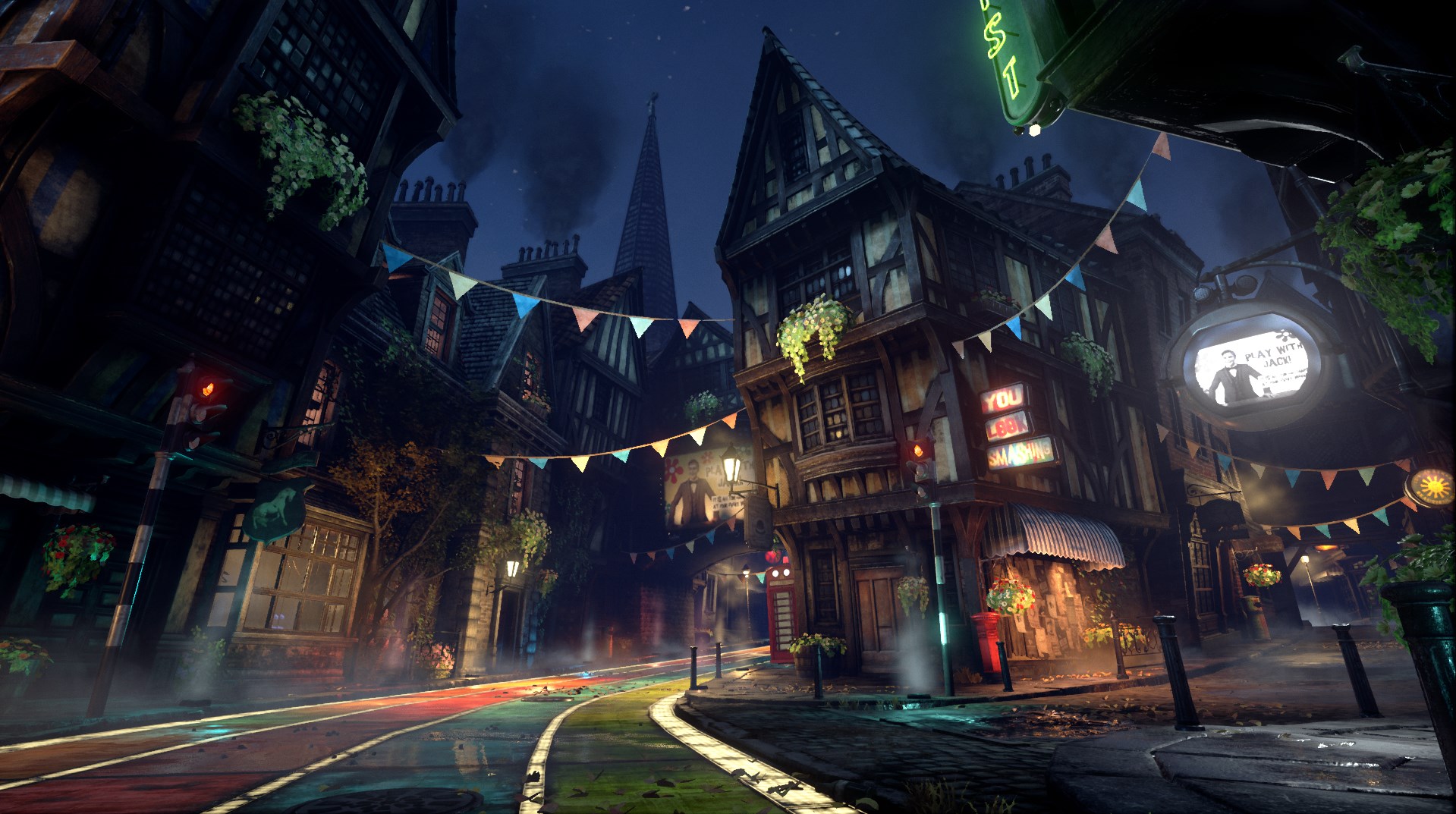 Hey y'all! This week I focused on the Shell Menu (that's the very first menu you interact with when you launch WHF). The efforts here will probably escape most people's notice (or interest, tbh), but on the off chance there's a little weirdo out there who's into this sort of thing, this update is for you! The Devil's in the details, as they say, and the Shell Menu is no exception. If I've done my job right, the design will be visually consistent with the rest of the UI, and will help the player navigate into sweet Wellington Wells dystopia smoothly and clearly, with minimal swearing and keyboard slamming. Everything from colour palette, to fonts, to button placements need to be done carefully and consistently, at which point I can lob this over to Clara for implementation and animation. Emmanuel has been building the background shot in 3D while I work on 2D bits n' bobs, so props to Emmanuel for taking abuse from Clara and I all week about the precise placement of bunting and mailboxes. <3

Editor's note: This gif of Sarah perfectly illustrates her journey towards perfecting the Shell Menu. Do not tell her.

Hi all! Props week for me. I made some electronics for a special place in the story. It was very cool to model these big buttons, Vu Meters, knobs and handles they used back in the 60’s. 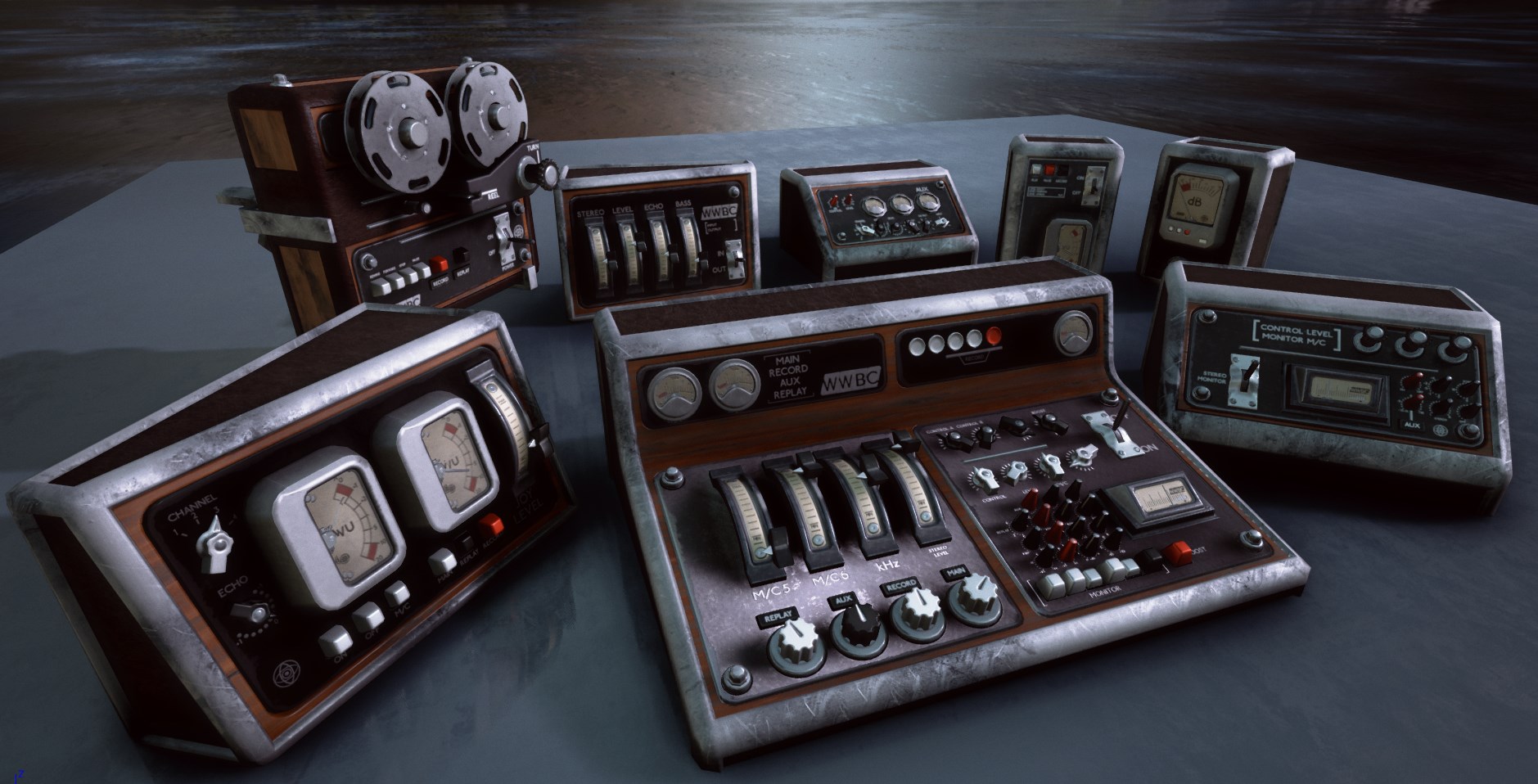 Hello all ! This week, pretty much like last week, I’ve been derushing the Uncle Jack shoot (reviewing the footage and pulling selects) and going over that-episode-we-can’t-talk-about-just-yet.

I'm really happy with the progress I made on the combat system this week. We added a cheering behavior for passive NPC that would get caught within a fight without reason to engage the player. I also iterate on its token mechanism to allow a far attack (like throwing rock) in parallel with a melee attack (their frequency and quantity will be tweaked during our polish phase based on difficulty).

Finally, I started the prototype of what we called the annoyed-conformity rule which was really lacking in our last update! Many of you noticed that citizen won't aggro to you for crouching or sprinting in streets without reasons (which is part of the whole conformity gameplay so precious to our game). I apologize for that regression but that's such a powerful rule that it needs to be properly set before being shown, otherwise it can create many side effects on the whole experience. Don't worry, that will be back in the final game with even better feedback than before!

I have been looking into how the animation networks for our NPCs work particularly in combat, so that I can help out Serge and the animators getting the fights in the game looking and feeling a bit more solid.

Hi folks! I am Steve Gibson, and I run Gearbox Publishing, a sister company to those folks at Gearbox Software who are working on a few other games with a bit more of a famous president. Our company is working on making sure as many people as possible get to see and play We Happy Few.

This week we visited Compulsion to brainstorm on when and how they would be ready to show off the story campaign, as well as ideas for future videos heading towards launch next year. Hopefully you enjoyed the first video we created in conjunction with the Compulsion team.

Also we're going to rename the Collector's Set to be called the "We Happy Few Time Capsule” before it becomes available to order next month. This thing is really intended for many of the We Happy Few fans who have already paid for the early access version, so it seemed a bit redundant to put in another copy of the game but the name, as you guys pointed out, kinda felt like it might. Don’t ask for my advice on naming your future children.

As our team does other things in cooperation with Compulsion perhaps a few others of us will pop in here sometimes. I don’t think we'll want to bore you guys though with things like how we're managing the logistics of boxes and stuff, but if you are interested in that, let us know! Please don’t tell Erick I said his job is boring (it is).