There is, of course, a reason for this decision. Early Access is amazing, but it’s becoming very complicated to maintain both a regular update schedule and lock down the story. The Early Access build is currently separate to the story build; they share a code base, but the content is slightly different. So far, the content has been able to coexist side by side, but as we add polish and really lace everything together, but this is changing.

The Parade District, in particular, is intertwined so heavily with the story that we don’t think we can deliver a good “Early Access” version, unlike the other biomes. By moving to only one final major update, we can merge the Early Access and the story builds earlier, so that we can concentrate all of our efforts on making the story the best it can be.

If you have any questions about this, please let us know in the comments.

Howdy! New designer here! Happy to be part of this great adventure. Ramping up this week, but also working on revamping a quest that never quite made it to the game: Lovebirds. Or did, briefly, but then we took it out to redo it. Hope you’ll like it! :)

Oh yeah, working on another new huge level that Guillaume is loving. He loves it when he gets these huge levels to art up. What a guy. Such a team player. I think he really likes working with me. 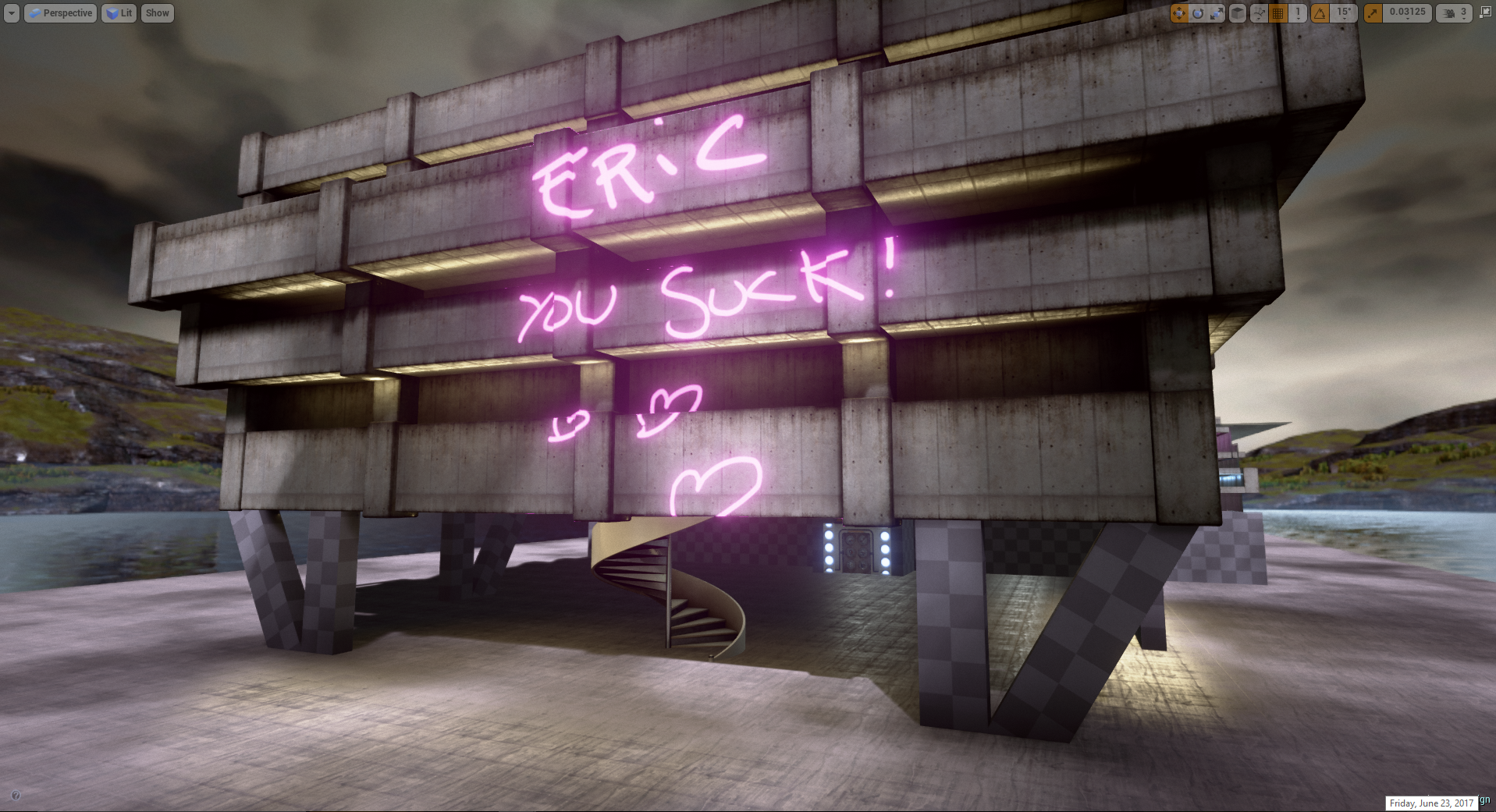 Anyway…….Instead of a crazy roller coaster this one is centered around a big slide puzzle in the center of a big facility. It’s been fun as hell to make. Should be pretty fun to play too, so yeah, that’s been my week. Scripting this beast.

This week was a bit short for me, but I was still able to start on the block-out for a new Parade District encounter and it’s coming along swell. It’s one of my favorite type of encounters; another gauntlet of sorts…

You can see your goal, just out of reach, but getting there is never as easy as it looks.

Designing this sort of encounter is more about striking the perfect scale for the area of gameplay (the game-field, if you will), timing elements, such as hazards, and creating safe locations for the player. Equally as important, is planning the routes of NPCs and the placement of loot and narrative objects that fall along paths most players would navigate - so it’s a lot like choreographing a delicate ballet of rewards, hazards, and… timing. I guess, something like that.

Not quite crop circles but the placement patterns I worked on this week might spice up the countryside areas around the Garden District. Procedurally generated but game designer controlled, they are far from complete but look promising. The goal of these things is to provide smaller, more systemic, areas for gameplay, to fill in the areas we currently have in-game and provide simple and varying challenges for obtaining different types of resources... 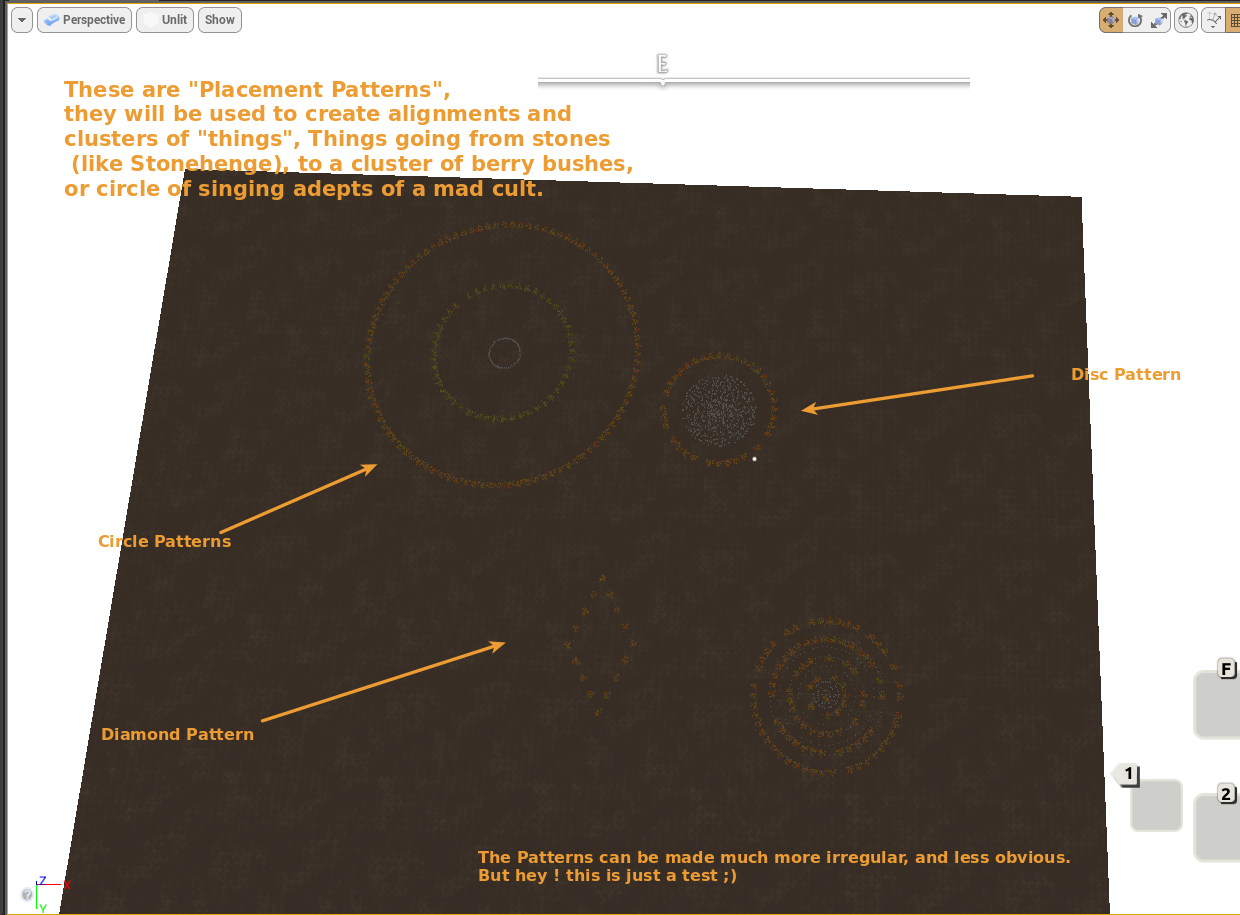 Rob, Evan, and Chris (Our new friends from Snowed-In Studios in Ottawa, who are helping us ship the game)

This week was focussed on getting UWP's XBoxLive connection to work, so we can verify that our Achievements code will work. This has been a bit of a battle, with Microsoft's Achievement Sample (outside of Unreal) successfully signing in, but our code failing to sign in even while using the TitleId from the sample.

The good news is we had a breakthrough just this afternoon, and after setting up our own XboxLive sample based directly off of Microsoft's fork of the Unreal Engine, it appears the problem was in the Live (UWP) part of the Engine itself. So, I've grabbed the most recent version of Live for UWP, and been able to sign in to Live with the same credentials.

So the next task for next week is to merge these changes back into our engine and verify that sign in works, then to switch over to the proper credentials, and turn Live services on for our game. After that, we will focus on issues from the UWP stress test, and then on to investigation/merging to start to bring in HDR rendering. Finally, Evan is jumping on to the project today. He's a programmer who'll be helping out with the UI system.

Secret props for me again so I can't show, but I can say that I spent most the week sculpting, doing retopo and fighting with Maya to work with my decimated mesh and the retopo tool, but almost there!

I notice I’m recording a lot more lines per hour than when we started. At the beginning, I was getting something like 60-80 an hour. Now we’re up to 120-150 an hour. What’s happening?

Mostly, we’re working with better actors. Over the years, we have found truly superb voice actors, who work fast and can do multiple voices. They’ve also learned our quirks. For example, typical voice directors seem to want the actor to repeat each line a bunch of times. I want the actor to put everything into the line once, and then tell him how it should change, if it’s not what I want. I find that when an actor does two takes in a row, often neither is right. There is a sort of quantum interference. They’re not deciding what delivery they most believe, they’re just trying to create a range of deliveries.

We’ve also learned a lot about working with British studios and British agents. When we started, I didn’t know how to get a casting breakdown out. In the US, you can put a casting breakdown up on Breakdown Services and get a bazillion submissions. You can do that in the UK, too, through something called Spotlight.

I would imagine we’re also benefitting from the game getting a bit of attention. We get submissions from actors who might not have given us the time of day some years ago.

And now, I’m writing encounter dialog. That’s always fun. It’s also surprisingly hard. It is very easy to write “oh look at that I should do this” sort of lines, but creating surprising and compelling characters and offbeat encounters requires more thinking than writing.

"So I've played this game a lot over the last eleven-ish months. My boyfriend has watched me play it a bit and I'm sure he's picked up on a lot of the game by hearing it in the background so often.

So this weekend he proposed (yay!) and said some stuff about how he wants to spend the rest of our lives together and such. then he goes, "And I promise I will help you find peachy so you can get your ephemeral linen!" :)

So, thanks we happy few for being a part of a huge moment in my life. this game is awesome."