Today marks the end of the content sprint for the next update, which means our level design, animation and art teams can move on to new stuff.  We still have a bunch of technical features to finish up - eg AI, UI and at least one major technical overhaul (which Guillaume has secretly been working on for weeks) - but the core content is done.  The team has created some, frankly, ridiculous encounters for you guys to experience, and we’re looking forward to showing you all.

Next week, the content teams move on to stuff for our final update, along with the ever ongoing story work.  So the levels you see from now on won’t be in the next update, but will be in the next + one (and final) Early Access update.

Most video games use “push” narrative: any time you need to know something, a character stands in your path and tells you what you will soon need to know. Da kine: “I am the protector of the ancient stones, which are past this gate; to get them you must fight me,” or “I have come to search for the ancient stones, which are past this gate; if you, complete stranger, will kindly get them for me, I will give you a magic hat.” (It’s amazing how trusting NPCs are in most games.)

The reaction I have to this is, “Get out of my way, I’m trying to kill some dudes!”

Most video game lore is “clean”: the only lore is what directly relates to your player character’s story. In Zelda: Breath of the Wild, almost every bit of lore is about Ganon and his takeover of Hyrule, which it is your mission to stop.

Our narrative is “dirty.” Most of the stories we tell through lore and through encounters have relate at most tangentially with the player character’s overall goal. NPCs aren’t there to serve your story. They’re there to serve their stories; it’s only an accident that their story intersects with yours. When you meet them, they’re in the middle of something important to them, and they have somewhere else to be after meeting you.

To me, this feels more like real life. No one is on Earth to serve your life story. They are there to serve their own life story. Even your Mom, who loves you, is living her own story. It may be her goal to see that your life is a good one, but that is still her goal, not your (related) goal.

I think this works better, because this is how our brains interpret the world. We never have all the information we need. We only have anecdata. We overinterpret the information we get. This goes back to hunter gatherer times: the guy that thinks the wind in the grass is a tiger doesn’t lose much by going in the other direction, the guy who ignores the wind in the grass the one time it actually is a tiger, doesn’t reproduce.

In other words: we are hardwired to turn our experiences into story.

Which means that, by giving the player chunks of narrative content that could add up to a story, we allow him or her to tell themselves their own story.

To my mind, the Holy Grail of game storytelling is: get the player to tell the story, rather than telling the player the story.

The individual chunks of narrative need to be linear in order to bear meaning – Arthur’s story isn’t choose-your-own adventure. But I aim to give you spaces in between the cutscenes which you can fill in. I’m only showing you the peaks; you fill in the rest of the mountain.

That’s my goal, anyway: to let the narrative breathe.

Next dev diary:  why, in spite of all of this, branching narrative is vastly overrated.

First location block out done! I spend most of the week working on this; a new shelter for the Parade District. For this building I did some new modular pieces for the outside and played with the layout of the inside. I have been moving everything around trying to find the best composition for it. I still have a lot of work to do on this one but so far so good. I have also been doing some small task, like fixing things here and there and creating some props for encounters. 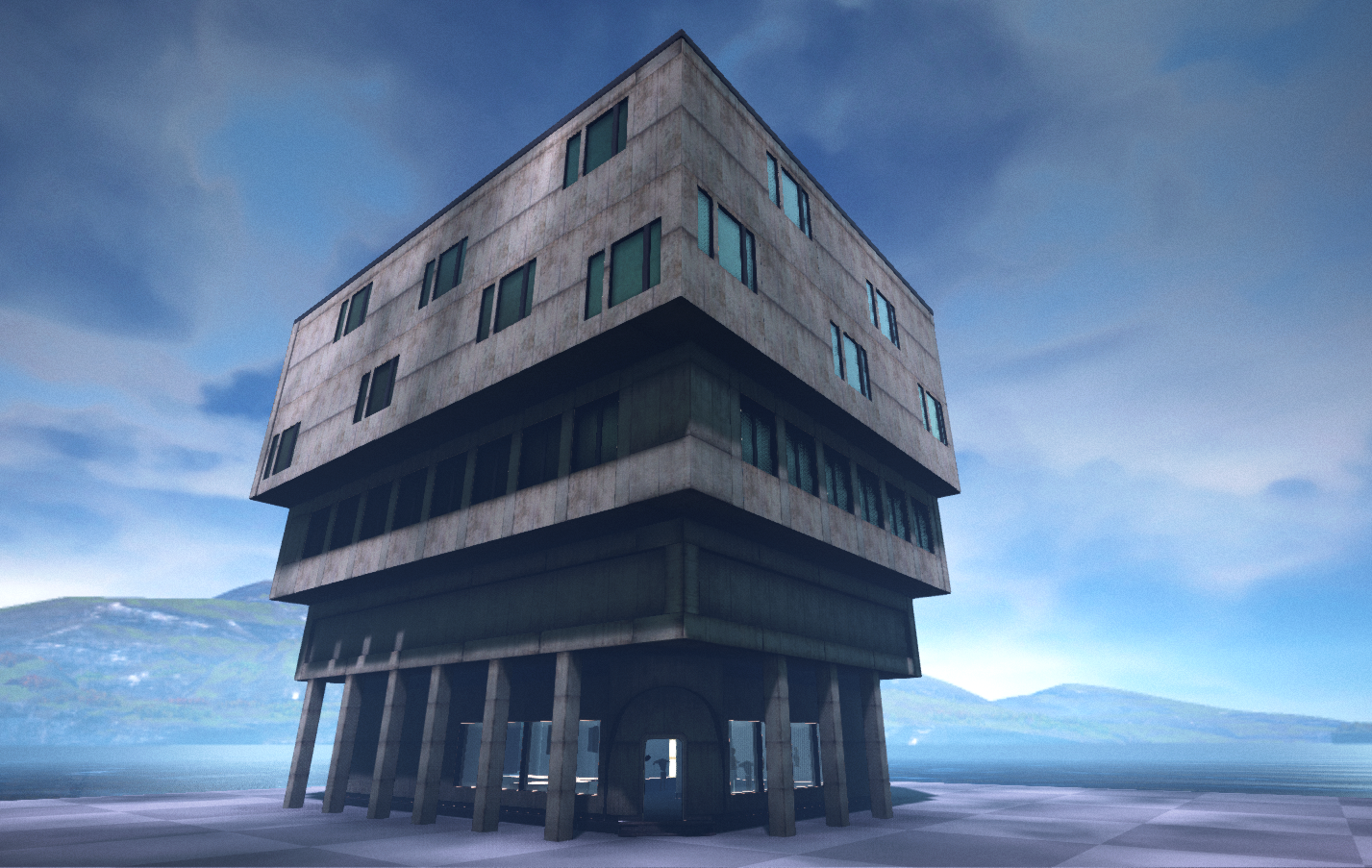 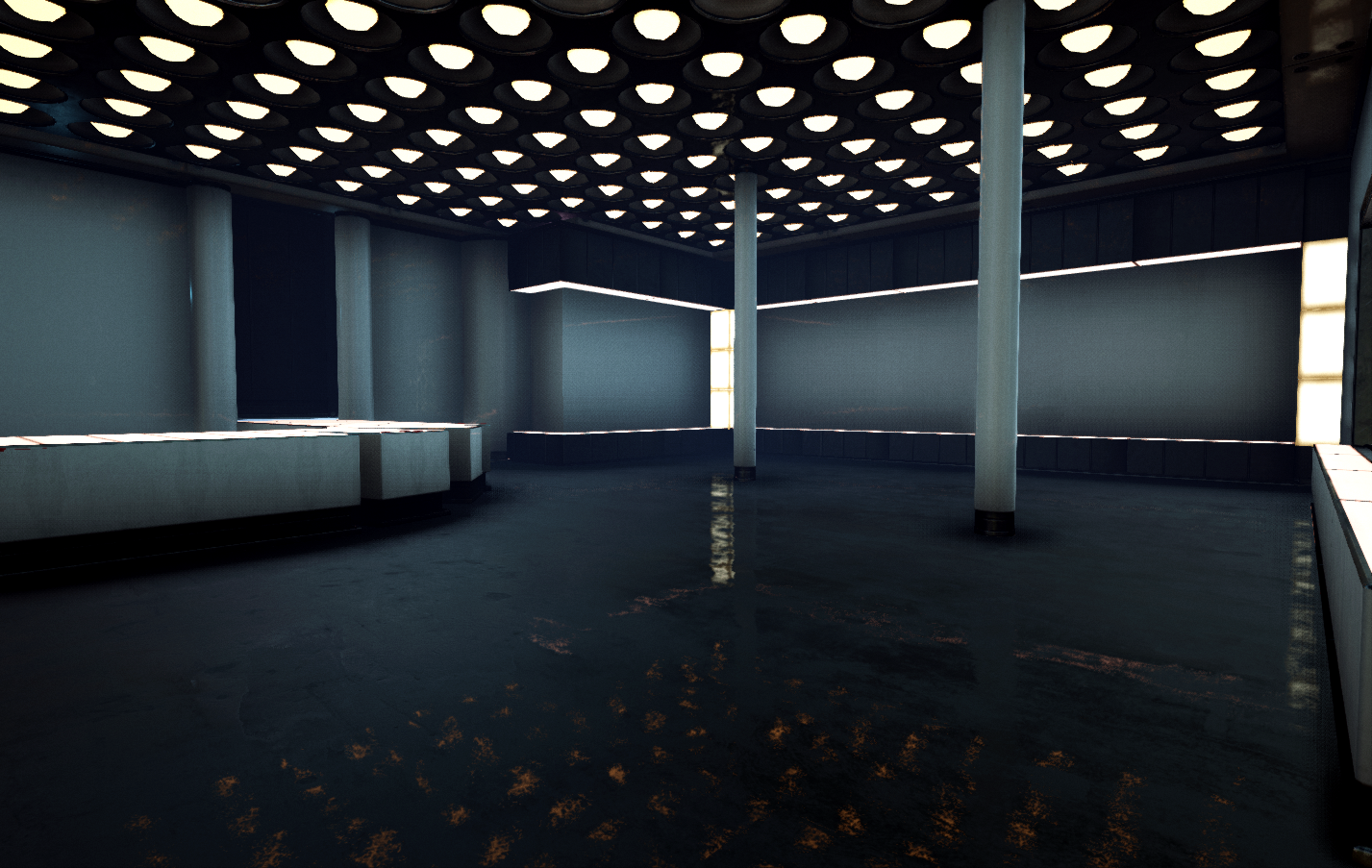 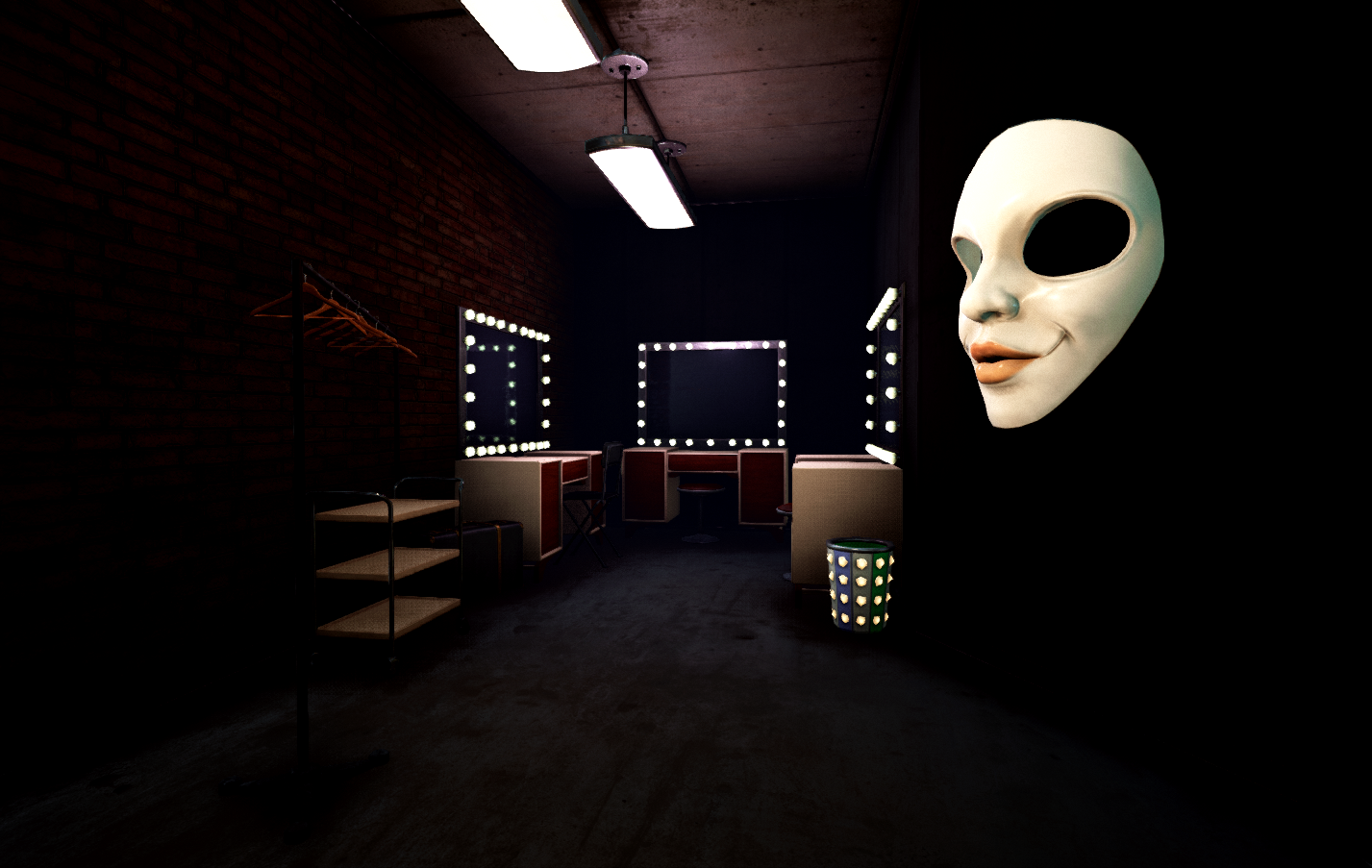 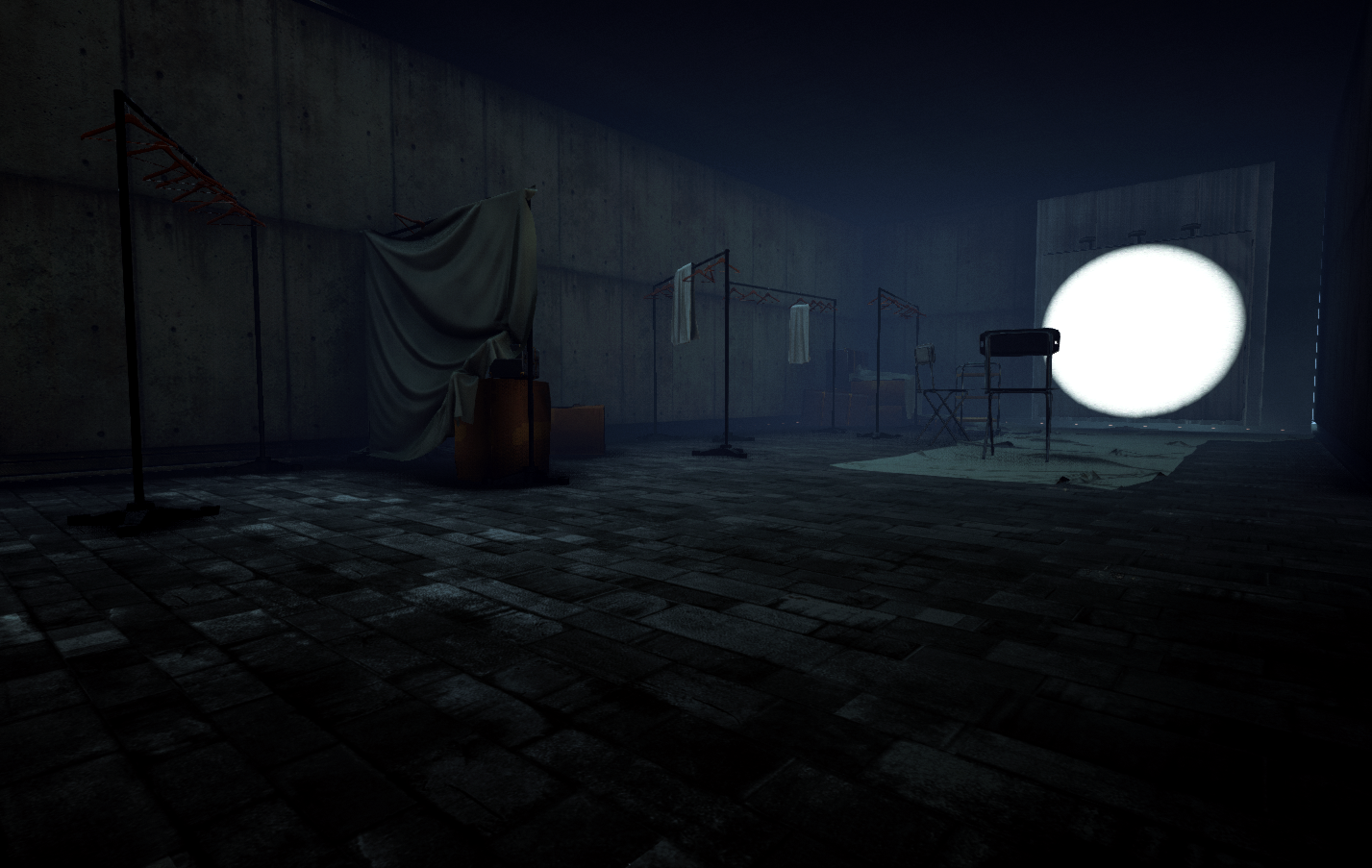 This week I’ve been touching up some stuff here and there to wrap up all my encounters, I hope you’ll enjoy them in the next update! There was some time for finishing touches on the giant robot thing as well. It now has complex state machines and several animations playing at the same time to fit its different behaviours! It’s makes for quite a complex animation script, but I had a lot of fun doing it.

We also welcomed in our imaginary ranks two contracting animators, Mark and Diego, who are going to help us finish up the TON of stuff we still have left to do! One is in Vancouver, the other in Melbourne… So with Maarten in Belgium who joined us recently on the programming team, I guess it’s safe to say that there is ALWAYS someone working on We Happy Few.

¡Hola! (pretty much all I know in spanish) This week, like Vincent, I have been finishing work on my encounters. That means I have worked on conversations and a few custom animations. I still had a few things to do on the butcher quest, but I don’t want to spoil too much. So even though I can’t wait to show you how awesome this encounter is, I’ll try and keep a few things for you to discover by yourself. That being said, here’s a little tease. This is a small section of the conversation you will have with the butcher:

On the more technical side, I have tweaked the scavenger extractor animations to be used on multiple surface angles. So instead of being completely animation driven, (full body AND camera controlled by animation) it is now possible to keep the aim of the player as the initial camera position. Here’s a little prototype testing where I can move the camera around while using the scavenger extractor:

That’s all folks! Have a good weekend.

I’ll keep it short and simple this week guys, as it was another week of work on encounters. Most of it was spent on the underground encounters, specifically this one scene where some guy is running away from something and trying to climb to safety. So, without revealing what’s going on--you’ll have to tune in on the update for that--let me show you a little preview. Hope you enjoy!

This week I was hunting for a problem in the way we are generating cities : sometimes we had two identical buildings next to each other. It was not quite a bug but it was really damaging the suspension of disbelief. After a bit of hair pulling (it was ok most of the time), the culprit was found. It was a random generator, which was …wait for it...  too random.  Duplicates may still happen but they should be much more rare.

Hello all, I have been stitching together a few encounters for one of the main character. I can’t mention much about the content… but you can rest assured that there will be more explosions, sex, drugs, and rock n roll.  These are a few of my favorite things.  I also lost 16 lbs so far, so that’s something.  ALSO… I will be taking a break for a few weeks as my son is about to be born!

Woo. Finally through the looking glass on this strange playable sequence I’ve been working on. All the hard annoying stuff’s been fixed. Now it’s just animation hookups, FX hookups, toggles, some falling debris gameplay, and a few other polishy shenanigans to go. Special thanks this week to JR, Vincent, and Ben for some help on this stuff, which you guys will see in the next update.