We have a pretty fun and compact Journal for you this week. Python like machines, human sacrifices, fashion shows, these are a few of our favourite things!

Before we get into it, here is our third and final episode of our series on “Building story inside encounters”.

It’s May, but I’m still thinking about Easter eggs – the game variety, that is. We Narrative Few give a lot of thought to small things you find in the game. For instance, this week I was asked to write nameplates for each reporter’s desk in the Hamlyn newspaper office. That meant the reporters all needed names. So here’s what I came up with:

Players who enjoy literature or Googling will realize they’re all British novelists with pen names. Our television critic is famously not fond of telescreens. Mary Westmacott likes to solve mysterious deaths in the Village. And so on.

I also mulled topics for new Uncle Jack shows this week, and realized that they could have Wellington Wells sponsors. So you may eventually hear ads for things like “Summerisle Matches -- great for birthday cakes and other celebrations!” (If you haven’t seen The Wicker Man, Summerisle is a town that enjoys burning human sacrifices.)

So, yeah, that’s where my brain is.

Alex and I hope someone somewhere might get a laugh out of these homages. But even if names and signs are just viewed as background, we believe that using real British names helps make the world of Wellington Wells feel rich and real.

This week I did a bunch of small stuff:

-Monday: Kept working on level art for the Butcher’s house. I added lights and progressed staging some areas that hadn’t been completed yet. Added new missing elements in the scene, such as clothes/rags to preserve the georgian-styled walls from many blood stains. I fixed a few Jira bugs (visual & sfx). I also did some cleanup (level merging and moving actors to their proper layers). -Tuesday: I arted up the speaker's corners' community billboards (3 levels), which are now full of Sarah’s illustrations. These will be scattered across one of the village islands. There will also be an alternate way to initiate some of the quests.

-Wednesday & Thursday: I spent most of those days doing the 2D Art / Environmental narrative pass for the newspaper office and the reporter's house. I optimised, imported and laid out a lot of signs and notes from Sarah. I created some 2D art of my own (awards, labels, etc.) for the newspaper office. After that, I created various pieces of meat with the most intricate shapes. They will show their purpose soon enough. 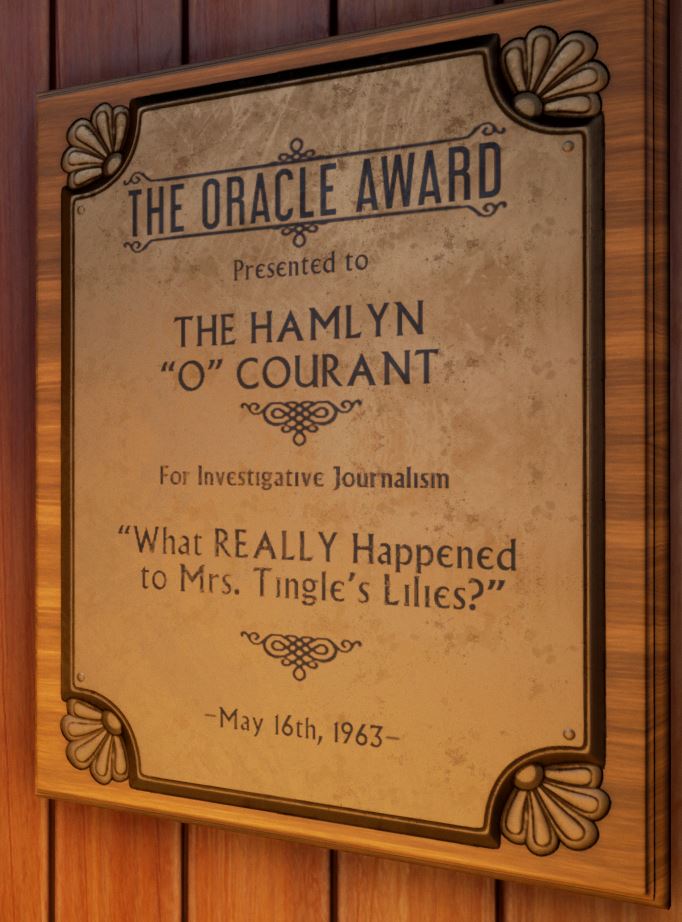 Same as last week, I kept working on the underground, adding a new area.

More props and maps! It has been a really busy week (a lot of work to do before flying away for a week) so I have been helping and supporting the team with some props for their encounters and making some art passes to some maps. 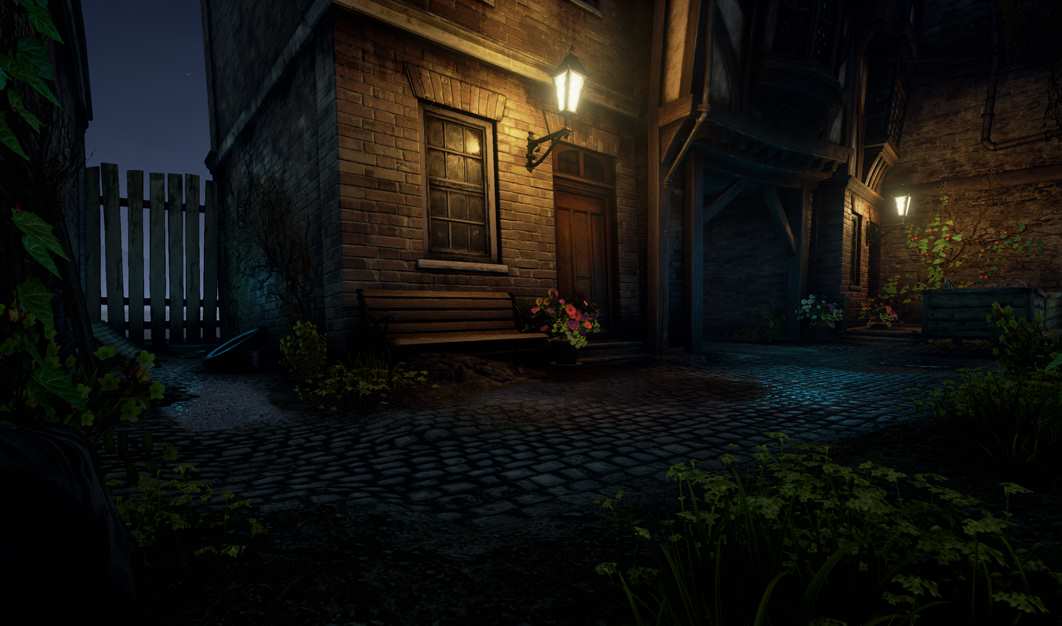 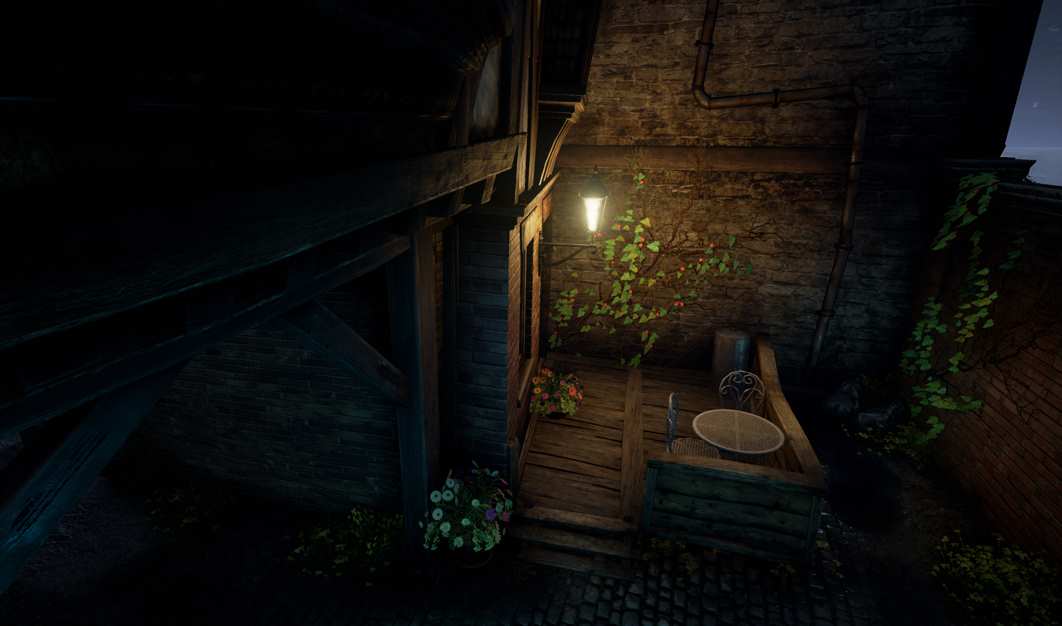 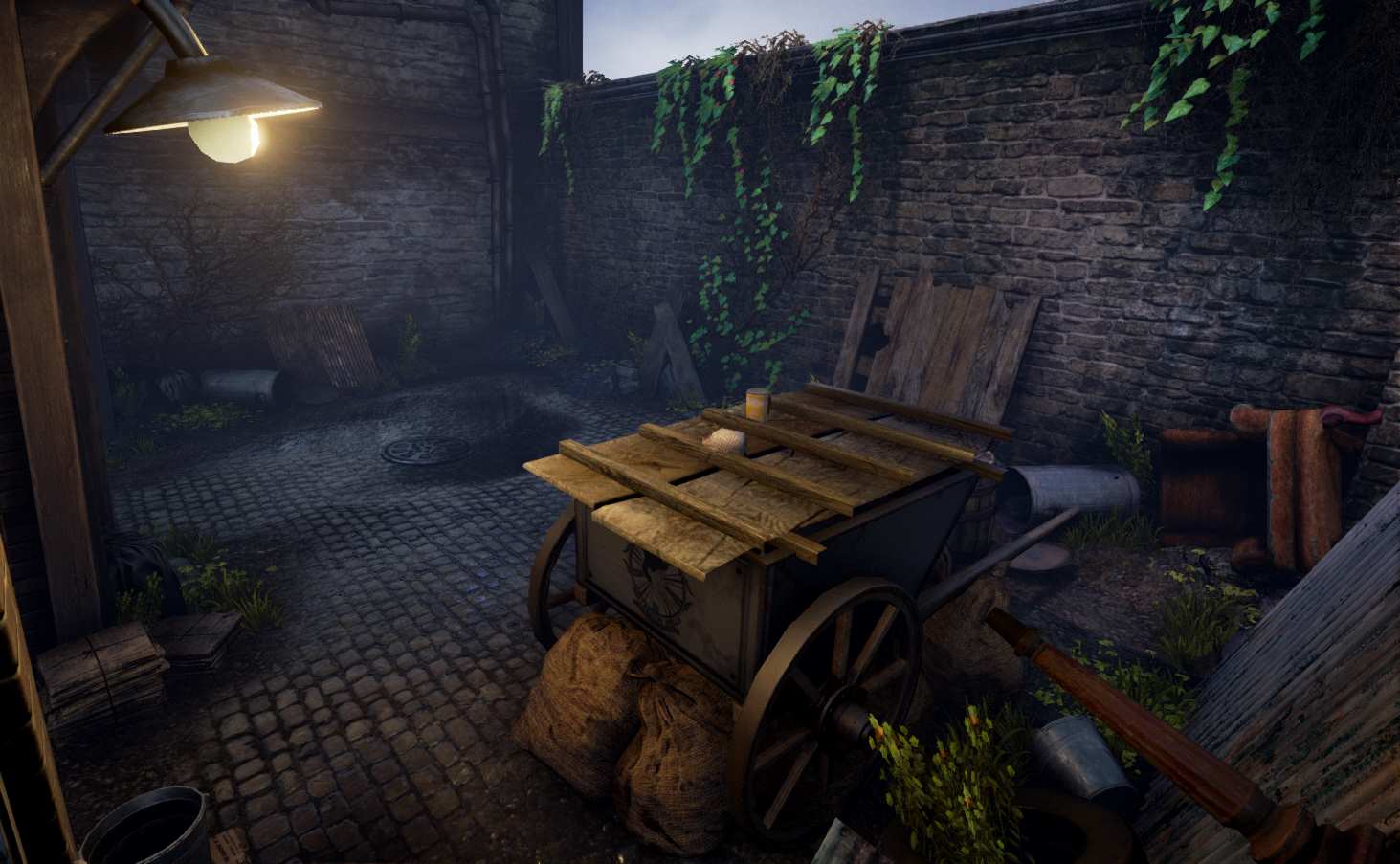 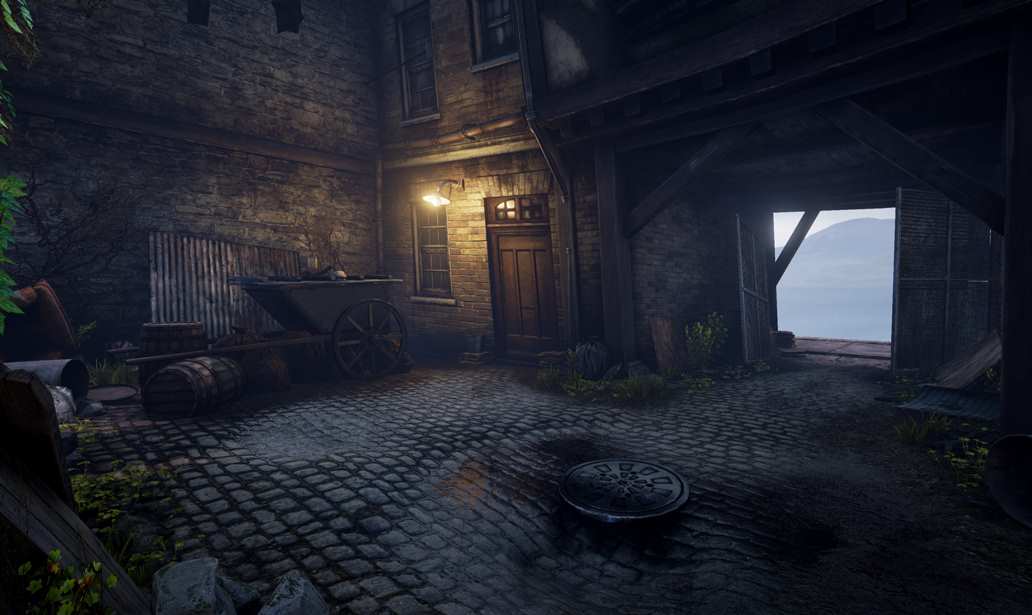 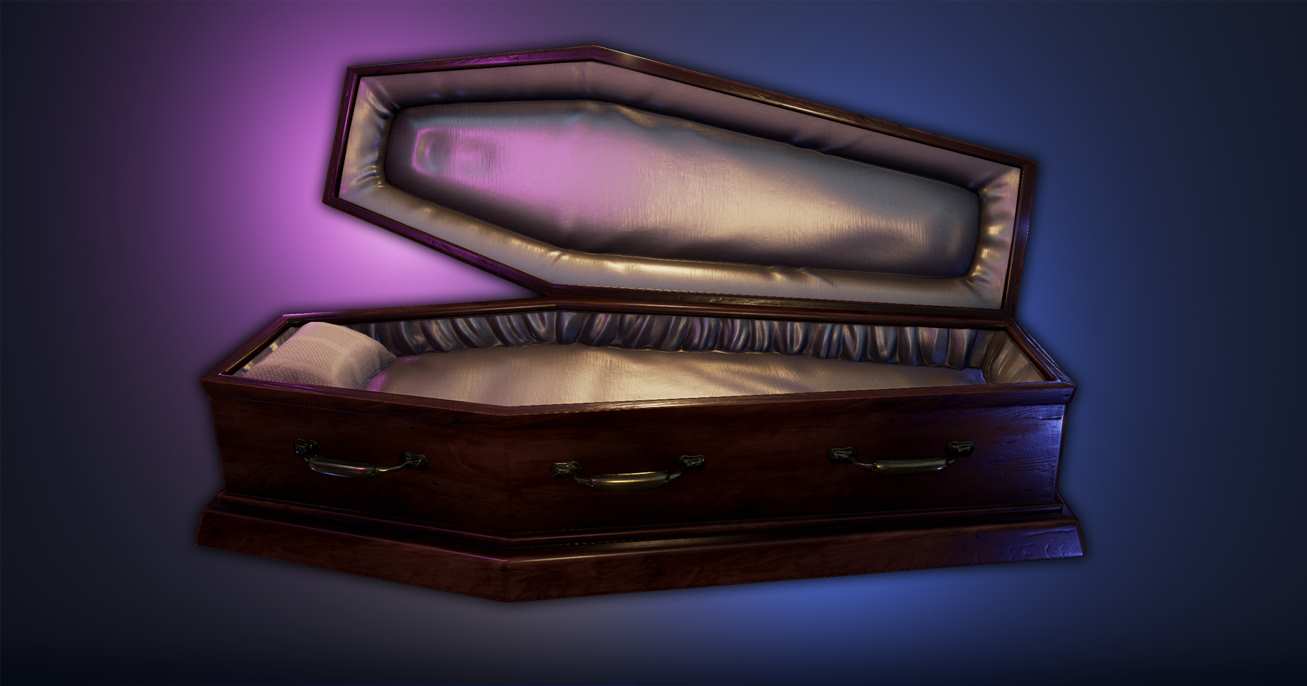 I have been working on Arthur’s last shelter:  the Parade District Shelter.  This one is a fun one.  It involves a fashion show.  It’s in pretty early stages, so the art isn’t all pretty yet… but it will be. 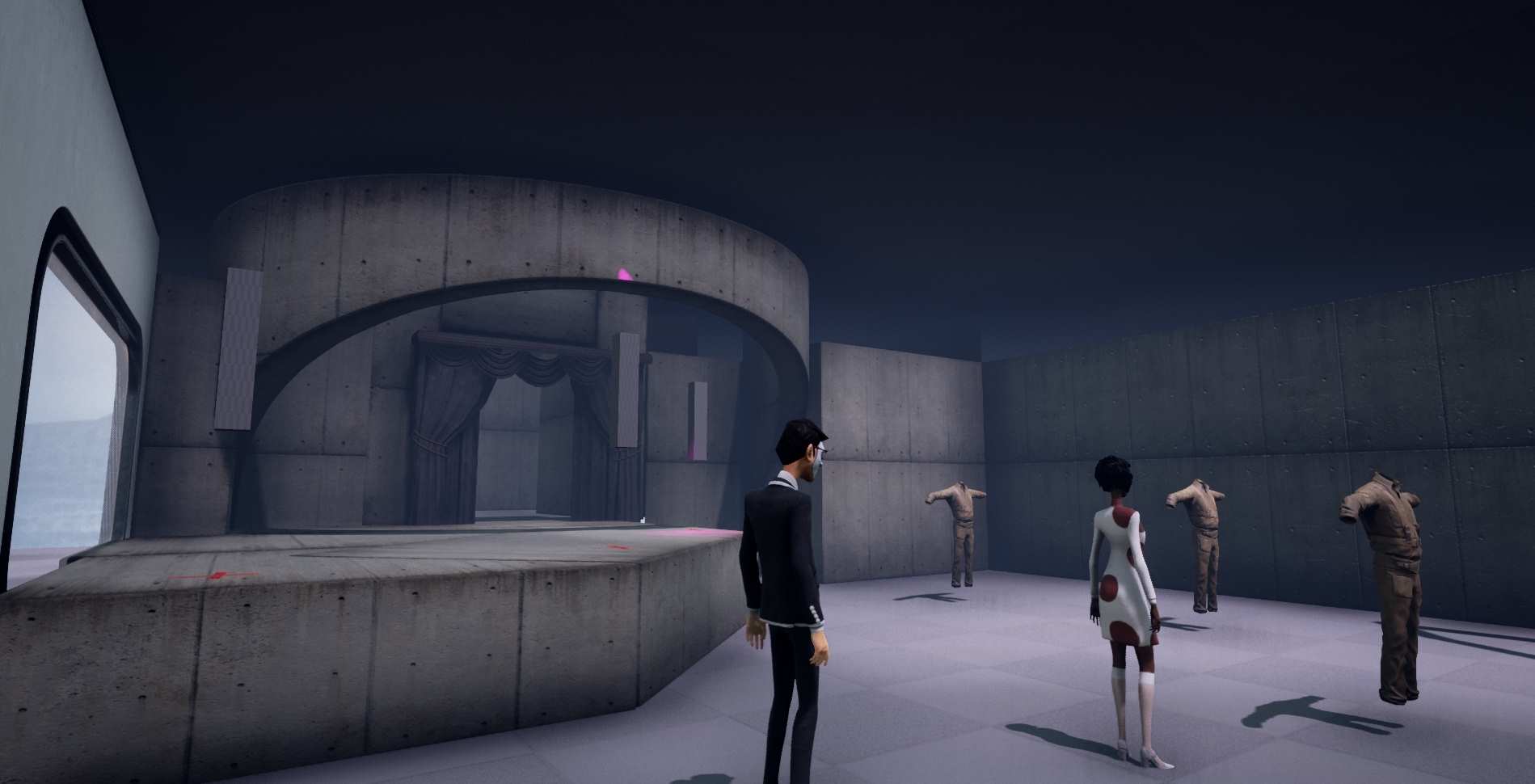 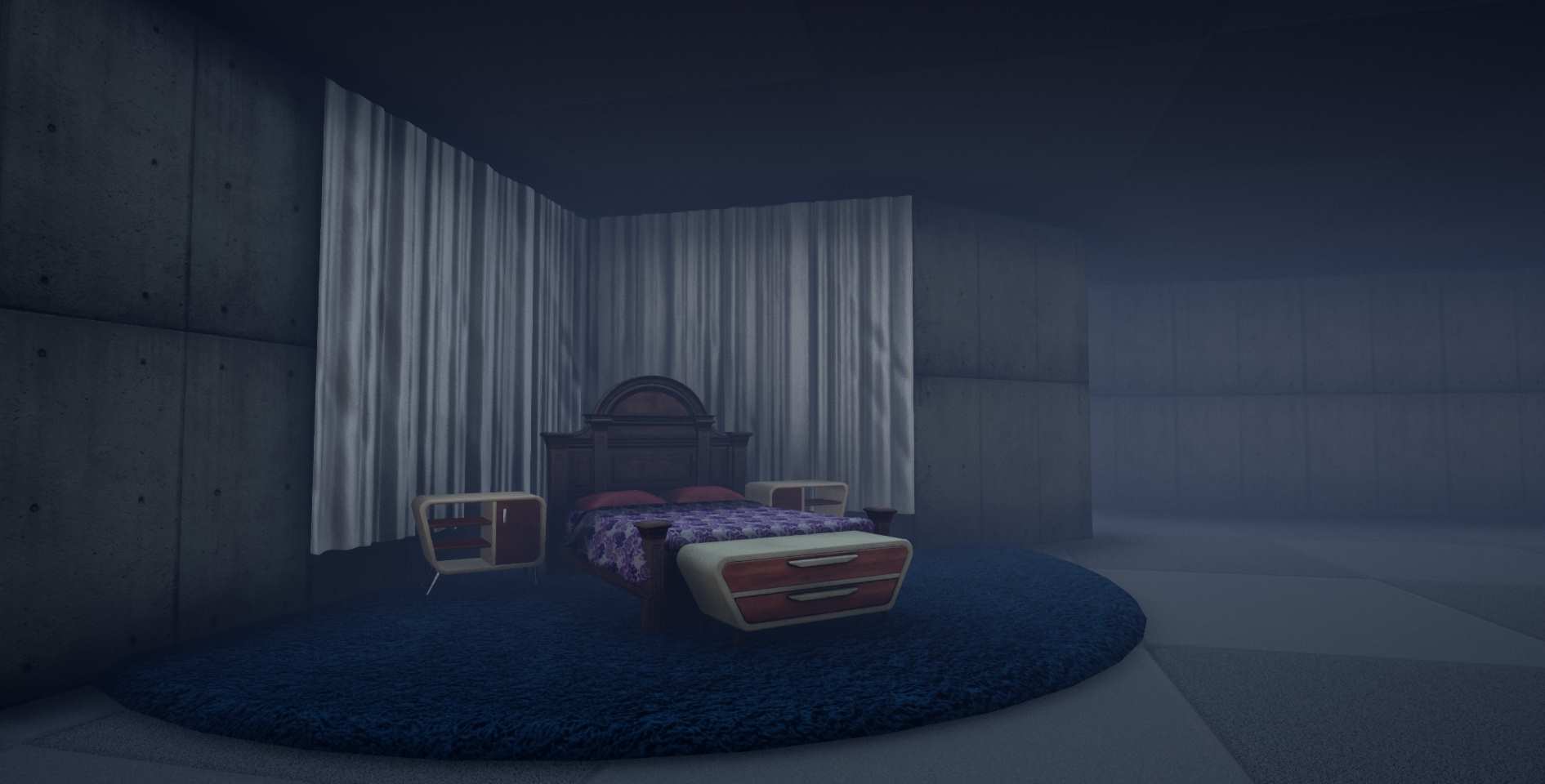 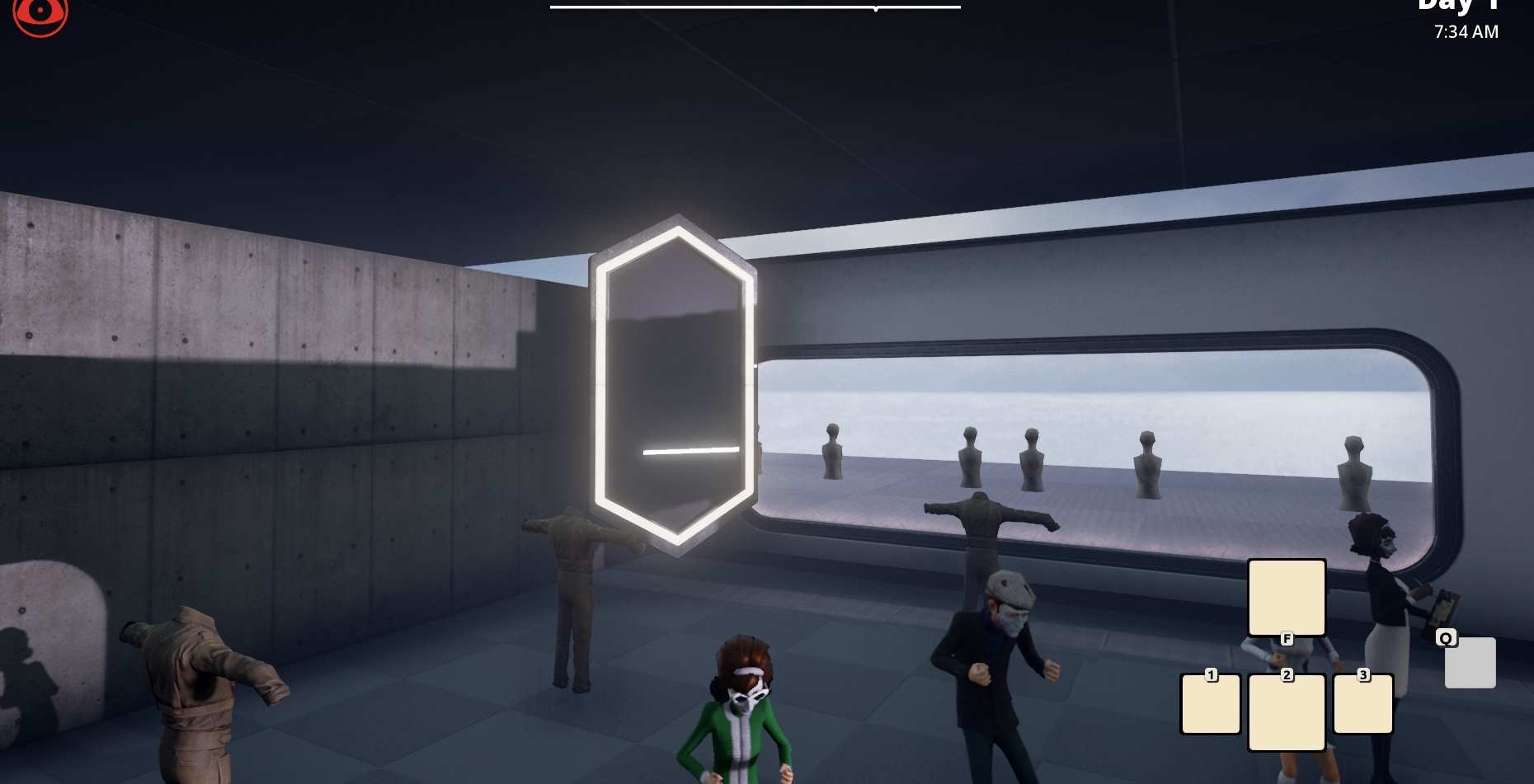 This week has been a bit less focused for me than the previous two. I’ve been going round cleaning up tasks that have been building up while the inventory screen was taking up my time.

We had an issue where all the glorious writing that was going into the game for the encounter objectives was regularly getting deleted by our editing tools, so that seemed like a good thing to fix. Also an improvement to the merging tools our artists use to optimise levels. So two things that don’t actually affect the game, but help us make it.

The inventory screen continues to improve with new features and fixes. This week we were thinking about the feedback we want to give the player when they are in the shop screens, particularly when the shopkeeper doesn’t want something you have. Here’s my inspiration: 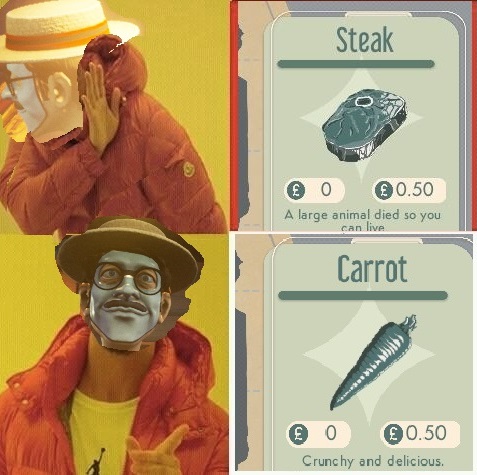 Back on UI this week again. We are getting closer and closer to something efficient that looks like... something. It’s still very shaggy but it’s definitely going somewhere. My main focus this week was building and adjusting the shop screen based on Sarah’s design. 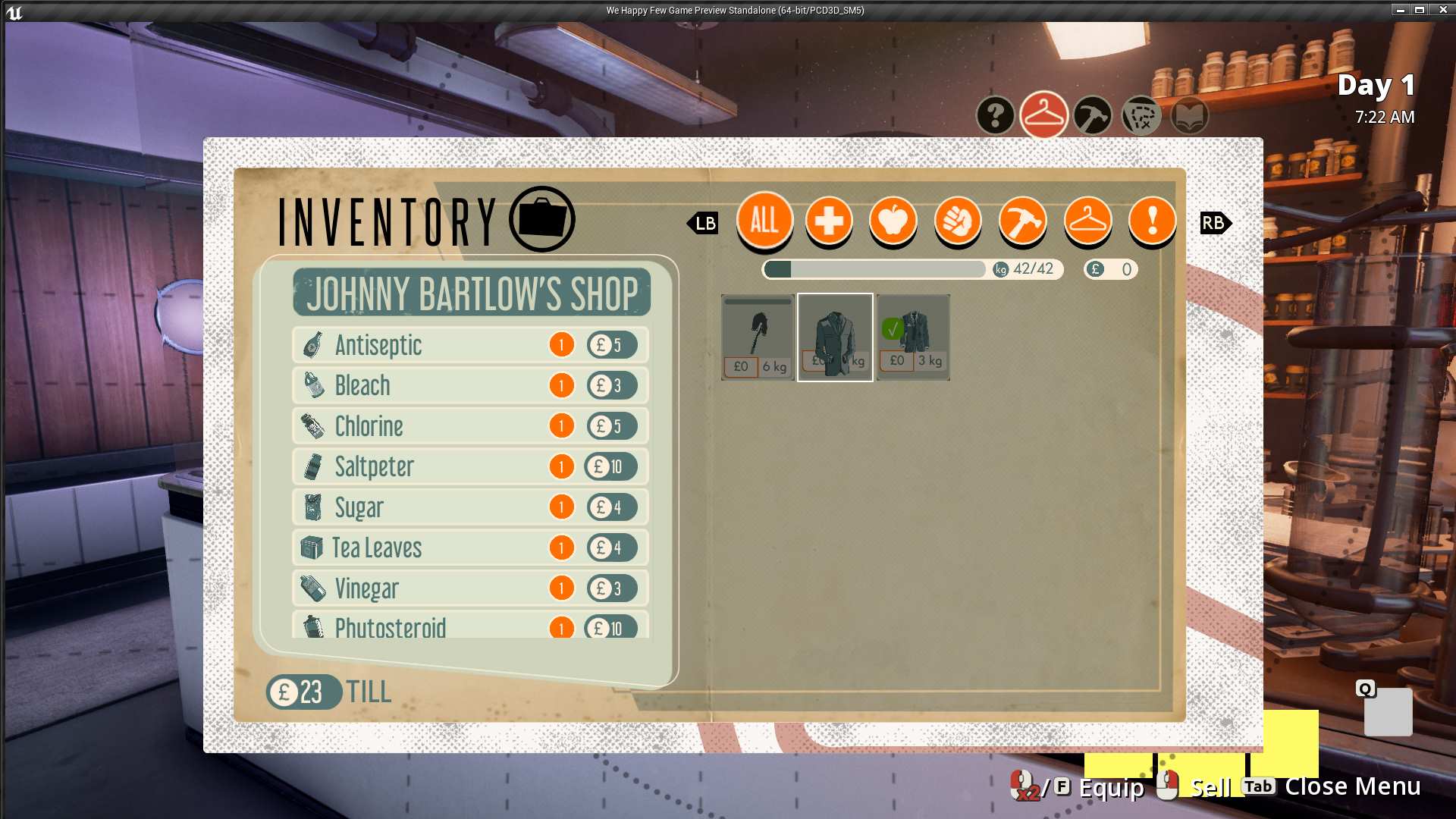 Not quite done yet as we are missing description panel for the objects, but you’ll be happy to know that stacking is a bit more effective now (thanks to some coding magic from Michael): 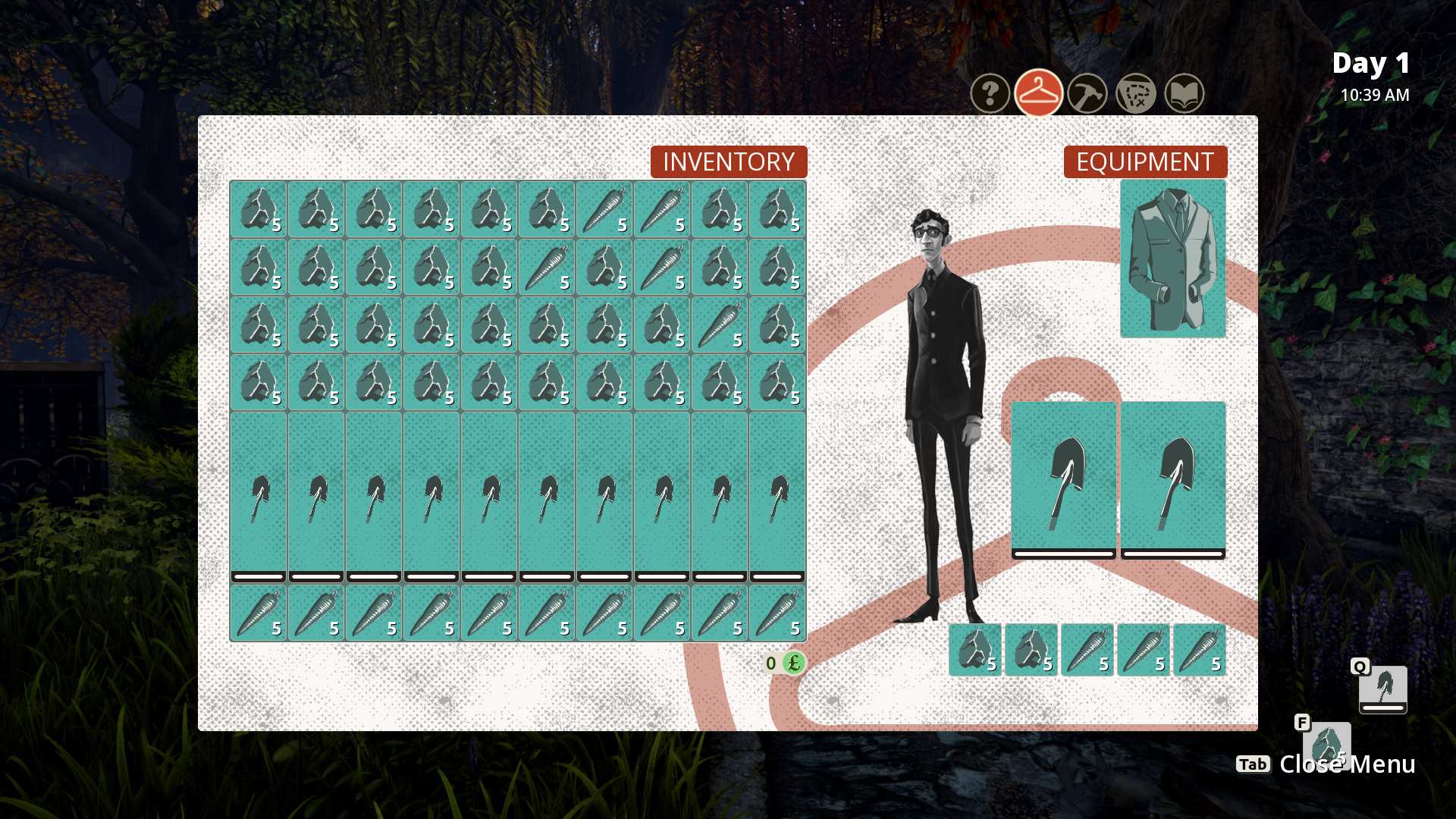 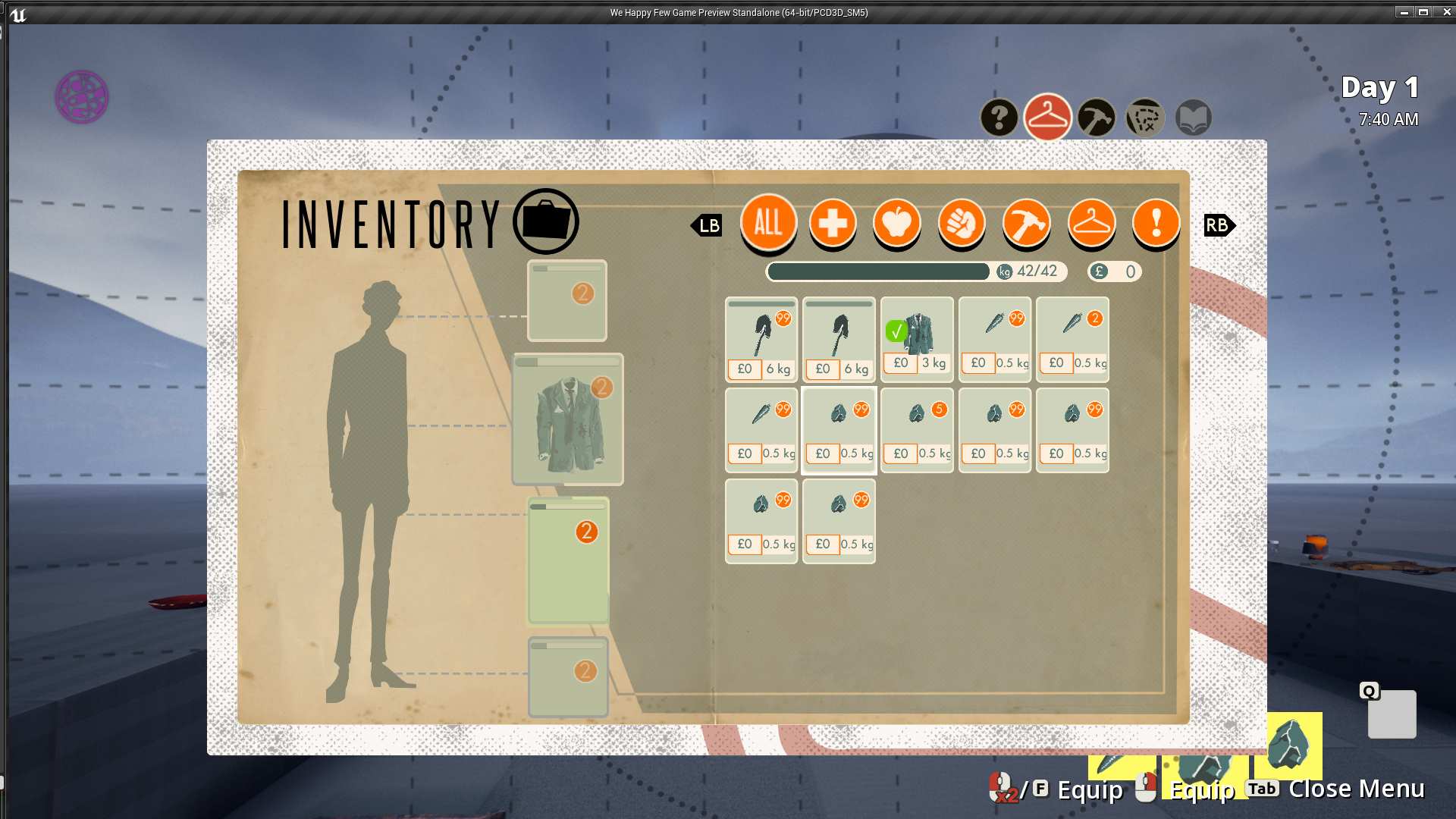 This week, the whole team shifted back to gameplay/encounters. This means I had to start the month by rigging a few machines. Because obviously, we need the machines rigged before we can animate them! Mechanical rigging is usually easier, since we don’t have to deal with all these organic parts. We just bind the skin so it follows certain bones at 100% and it’s done. I’d say that the most important part for mechanical rigging is the planning. Make sure you know what the machine will be used for and what kind of movement it will have to do. Ideally, you get to sit with the modeler and level designer before you create the model, so you can make sure everyone’s on the same page.

These machines are very… interesting! I’ll let you guys try and guess what they are used for. If you think you’ve guessed right, let us know in the comments.

Hello again ! Like Remi said, we are again focusing on gameplay and encounters this month. On my end, that meant working with the level designers to get the scenes set up with all the actors, new animations and new conversations.

I also had a lot of fun playing with the Jubilator™ recently. A very intriguing vehicle to say the least! I started by polishing the existing animations, basic locomotion mostly. Then I started doing some more fun stuff. I mean you have to wonder, what is this machine for really...? Here's a video to give you a peek at the Jubilator's™ most important role in the respectable districts of Wellington Wells.

The week started by rigging duty on the big construct (err… robot, looks like I played too much Torment lately) that Cary showed you some time ago. I did a little test animation to make sure everything works well :

There was a few tricky details in the model like pistons and wires, they added a bit of work but they help give some believability to it… 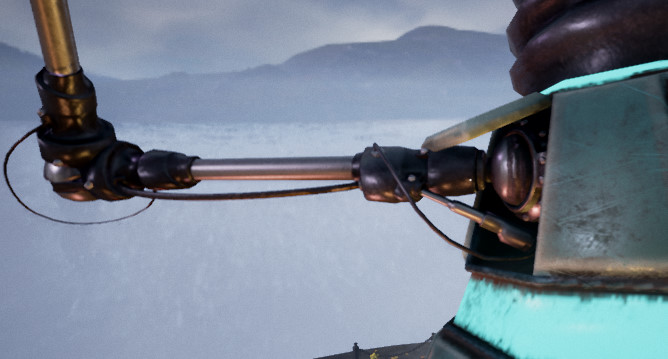 Next step along with Ben is having this baby animate well, it needs a proper Animation Blueprint and co.

On the side I also did some quick tests to see how the Jubilators could ‘vacuum clean’ the streets of corpses. Yes. That is weird. Playing around with rag dolls would avoid having to align properly the Jubilator to the characters. Of course, that could also introduce some bugs. But who really hates rag doll bugs ? They’re always entertaining to say the least.