Now that Arthur is done, we all wait with great anticipation for next week’s playtest sessions, where people will have the opportunity to play through the whole of Arthur’s story for the first time. It’s very important for us to witness players’ reactions to the new flow and to check that what we implemented resonates well with what players expect.

You’ll see that most of the team has spent the week on either final bug-fixing for Arthur or polishing for the other characters. Well, the part of the team that has not been hit by a mysterious plague (ain’t winter grand?), that is.

This week I did polishing work on the Doctor Headquarters. I laid out a bunch of objects to make it feel less empty and more like a place. I also did some lighting tweaks and bug fixing pertaining to that, and created some new meshes such as an operation table.

Hi! This week I’ve got a good time on weapons. Team gave me the opportunity to imagine 2 flaming weapons. So I quickly sketched some crazy ideas and I assembled pieces in 3D to get a first look. Since it’s heavily gameplay, there’s lots of back and forth in the design. I’m trying to get something cool that the player would love to use and feel powerful. But what’s the definition of “cool” in video game? What is “cool” in We Happy Few? It’s more complicated than expected.
In the end, I think it will need additional work to come up with awesome flaming weapons but here you are some 3D concepts :

Hi. So this week I’ve continued to polish our combat animation. All of the final tweaks are done for the attack of the NPC. It’s looking great and I’m really happy about that. I think we reach our goal, the wind-up is clear and the attack is appropriate for our wellie and wastrel. What I mean by appropriate being, when you start a fight in the street of Wellington Wells, you have the real feeling of being attacked by a crowd of random people who want you dead. What we didn’t want was during the fight, you have the feeling of fighting against some people who are experts in combat.
Also, I’ve started to polish the taunt animation for the NPC when they engage in the fight. This week I am sharing with you the wastrel heavy attack. See you next week!

Sup folks! Not much to report this week, I’m done with cutscenes for now and am back to animation chains. Trying to make your encounters/conversations with our lovely folks as interesting as possible. It’s a nice little respite for the hectic schedule from the past two weeks. Well that’s it from me, tune in next week, Same Bat Time, Same Bat Channel!

Ahoy! This week has been mainly about polish and realisation. That’s when you take a functional scene or encounter, and try to make it flow a bit more and look more natural. All that without breaking it, hopefully.

I also did some more general tweaks and bug fixing, like retargeting the sleeping pose for female characters. Up until now, they used the same animation as male, and as both genders models are not made quite the same, the result was quite bad. That’s the kind of obvious but non-essential things that get to be tended to at the end of projects. It is super satisfying to finally take care of those little matters, that, as a whole, will make the experience a little bit more immersive. 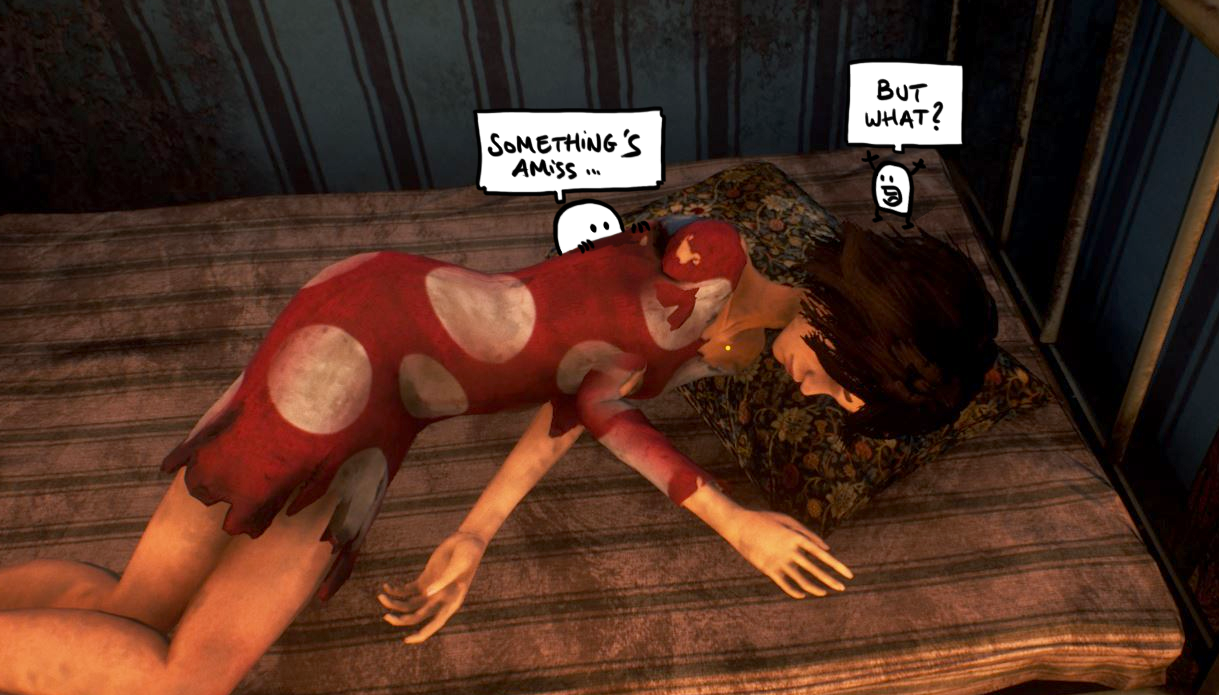 The priority this week was the playtest build, which means making sure that we can provide a version of the game for people to play all the way through Arthur’s story, without getting trapped by bugs or broken logic. This means tasks like: debugging why some quest rewards aren’t given, and some quests aren’t showing up when they should be active, or making sure you can’t shove an important NPC through a wall while you’re fighting them. In between the firefighting there was time to focus on less pressing matters like why the throwing arc visualisation doesn’t work for heavy items. The possibility of having to look into the physics system is always a terrifying contemplation. Fortunately, after drawing lots of debug lines and dots on the screen to show the difference between the arc and reality I was able to track it down to something in the game code. Seemed we were adding extra gravity too early, physics code blackhole avoided for another week.

This week has been all about population management to increase the density of characters in the village's streets! The challenge here is to have more NPC without creating performance issue so I started by pushing the system to its limit in order to stress the mechanism that choose which characters should be updated or paused. That decision is based on many factors like the importance of a character related to the gameplay or his visibility on screen (to only name a few of the information we use to score its relevance).

With the help of our quality assurance team and game designer, we will tweak the size of the targeted population to find the best equilibrium between realization (for which more is better) and performance (which is quite the opposite, less is better). That's just a hint at the kind of technical challenges we have in real-time entertainment industries!

This week I worked on balancing the loot in cellars and other uncovered places. I also did some balancing on the weapon side and made the wastrels and wellies able to block attacks. Mostly, bug fixing and balancing! :)

Thanks for tuning in.

You can discuss it here.