We are finally (already?!) in August! As previously announced, we will be releasing our last public update for We Happy Few before its final release. The Life in Technicolour update will drop on August 16th! The update features new Joy effects as well as a brand new UI (still WIP), AI rework and much more. Look forward to the update video on the 16th!

But today, we wanted to give you a heads-up on some important information…

Since we launched our Kickstarter and released the game on Early Access, We Happy Few has been priced at US$29.99. We have never put it on sale because we believe it isn’t fair for someone to get the game at a lower price than a Kickstarter backer or an Early Access backer while the game is still in development. Since 2015, we have made clear that the price would increase as we approach the final release, and that time has - finally - come. On August 16, the price for the game will become US$50.99.

We will explain everything in more detail on the 16th. As you can imagine, there is more to the story, and we are looking forward to sharing all the juicy details with you. We always do our best to be transparent with you guys, so we felt it was important to provide this pricing information with ample time for you to make a decision. And, just to be clear, if you are a Kickstarter backer or Early Access player, this change does not affect you.

In the meantime, here is what the team has been up to this week!

Your typical quest giver is a guy standing around outside a dungeon waiting for an adventurer such as yourself. He can tell you all about a great treasure in the dungeon! Or he will give you a nice sword if you obtain some item from within, like his wallet, or maybe his car keys.

Leading me to wonder why he didn’t go himself. And how long he’s been standing around. Does he sleep? Does he ever go for a pee? Is there a sandwich cart that comes around?

In real life, of course, people rarely offer you jobs out of the blue. (And then it’s in Malmö or Singapore or something.) Generally it works the other way around: you find out that someone has a sword for sale, and you go and ask what they want for it.

The Witcher finessed this nicely. People in that world post “Witcher Wanted” ads near pubs. They are waiting for someone to come to their home to offer them Witcher services, for which they’re prepared to pay.

So we can take the curse off quest giving.

For example, in the Miss Thigh Highs playthrough, you need to learn something about, let us say, washing machines. You know the washing machine repairman, Alfonso Maytag; he has fixed your washing machine, after all. At the pub they say he’s out by the Tor, a local hill.

In a regular video game, you’d meet him out by the Tor, and he’d say, “My friend Freddie has been captured by cultists. Please rescue him and I shall give you this book on Washing Machine Maintenance!”

In our game, he’d say, “My friend Freddie has been captured by cultists!” and your player character, who was in primary school with Freddie, will say, “Oh, my God! Can I help?” Obviously you’re not going to waste time chatting about washing machines while poor Freddie is in danger. After you complete the quest, though, equally obviously, Mr. Maytag will happily let you xerox the manual to your Hi-Capacity 27” Front Load Washer.

From a gameplay point of view, these two setups are exactly the same. Find the quest giver. Learn of the adventure. Complete the quest. Get the payoff.

But from a narrative point of view, one feels more natural and human. That’s important to me. The more real our people feel, the more the player engages with them emotionally.

Video game worlds contain a tiny number of salient objects. Stories are what allow our minds to weave a whole world in the spaces between them.

Figuring out what makes the quest feel natural instead of gamey is a lot of the effort I put into writing encounters. By comparison, character dialog is easy once I know what relationship the characters have to each other.

(It is hard to explain procedural generation in a few lines so I won’t be literal) I am in a cave, in a lab worthy of a mad doctor, glass tubes and all. I am creating cities. In a new way. A new technique that mostly works but sometimes the result is ugly or misshapen so I revise, refine my protocol, again and again. We are getting slowly getting there, as the many failed virtual creations pile up on the floor.

Still a tiny bit more time before the update, to cram in new-ness before we get our bug hammers out, and start fixing as many problems as we can, new and old. I have added a new item to the HUD, a waypoint which shows on top of your currently tracked objective. It is possible to turn it off if it’s bugging you, via the Game & HUD section of the Options menu. It was quite an interesting task, because if the objective isn’t on the same island as you, we want the waypoint to take you to the bridge you need to cross. So I got to write a little baby search algorithm to look through the bridges and find a route to island which has the objective. Super fun! 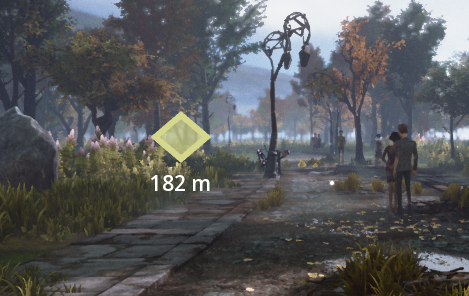 I also added an icon for the NPCs to let you know if they are bleeding and losing health that way. Sometimes it was confusing why people would suddenly collapse without being hit, and hopefully this will clear up the mystery.

This week I put in code to play a looping movie during level load. I switched from using the DefaultMoviePlayer to the FullscreenMoviePresenter for this, and I added an interface for playing the video to a texture. This solved my previous crash issues, but there is more work to do on the video framerate during parts of the load. I also switched the game to be mostly using the vpxMedia player (webm) and very soon I'll remove the wmfMedia (mp4) system fully which should help with overall memory, especially on the Xbox.

Mike (starting to not be the new guy anymore, relatively speaking of course…)

Sup! Hey folks, so this week I polished up a cinematic animation and started developing a whole new set of a character’s idles and movement bank. It’s going to be pretty cool and I’ll get to have fun with it. Let my hair down… well.. if I had any that is.

Hi! This week I worked on a few “ambient” animations. Characters playing board games, hopscotch, reading books... or painting on the wall like a vandal (looks like some folks don’t take their daily Joy).

If we have a lot of activities for our NPCs, it will make our environment much more alive and reinforce the immersion for the player.

I’ve been fixing and polishing An Awkward Courtship quest most of the week. Mostly adjusted the dialogs offsets, animations and detection gameplay. Still has a few issues. I’m getting help from our engineers on that.

I also did a good pass of polish on The Lovebirds quest coming up soon.

I’ve been fixing bugs this week, lots and lots of bugs in:

Mystery House - no more getting teleported to death!, also changed the hostility and patrol paths.

Hallucinogenic Salad - a better suicide jump from the woman upstairs, and changed hostility of the people inside.

Everybody Gets Stoned - Fixed the bell so more NPCs will show up to attack you.

If you Give a Pig a Pancake - Fixed some bugs involving stealing breads too fast (which could break the quest).

The Great Stink - Lots of Jubilator tweaks and navmesh fixes to make sure it follows you around the map.

Church of Simon Says - These teslas are a bit more punishing for you now. They won’t target the crowd anymore.. Only you!

Intro Shelter - New cinematic when Arthur leaves his shelter, to put him in the mood and give him some clues about how to start.

On the story side, I’ve been working with Mike (starting to not be the new guy anymore, relatively speaking of course…) to showcase some of his animation work.

On the writing side, I’ve been working closely with Alex to flesh out details of our 3rd character’s main story. It’s shaping up quite nicely.

This week was all bug fixing for me too. Maps like I Sing Body Electric, TV Altar, Get the Dolly, Treehouse, and a bunch of save load bugs. Also, don’t eat dodgy food. If it don’t taste right, or look right you might regret it and become great friends with a toilet. That reminds me of an amusing anecdote on my honeymoon…. But that’s another story for another time.

Did a bunch of awesome props this week! But only one matters. 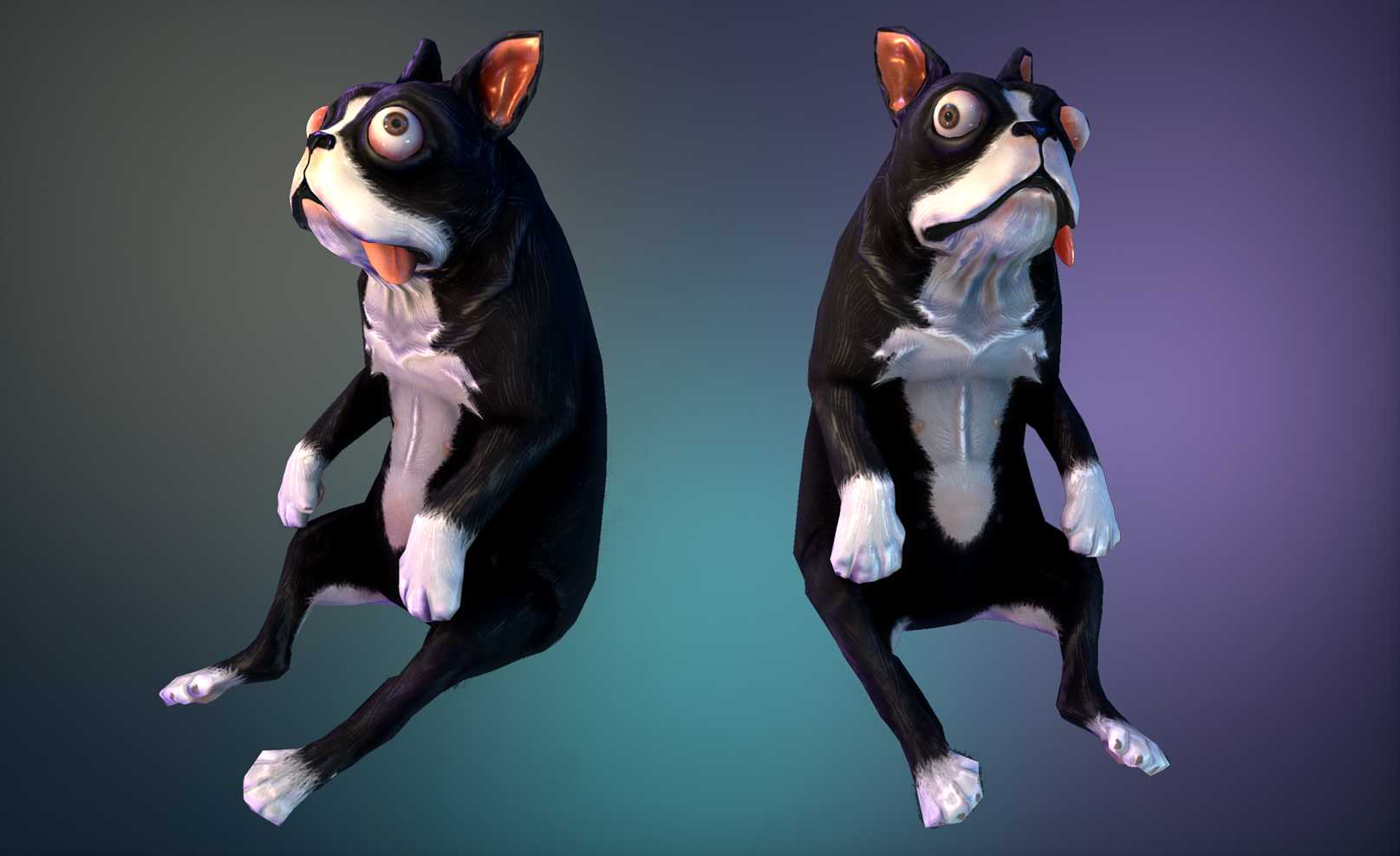