We are sure you are all wondering when the next update is going to drop. Well, wonder no more! E3 is coming up in the middle of June (we are attending but not showing anything) and so as not to overlap with it, the next update will likely be coming end of June, or early July. Remember when we had our Kickstarter at the same time as E3 in 2015 and almost didn’t meet our goal? HA HA HA Good times.

Hi guys! This week was more of the same encounters for me; a lot of fun and a good amount of polish. The little teaser from last week especially turned into something pretty neat! What I can say is that it was a cool challenge to animate something completely new. For me but also for the game. As Arthur, a Jubilator gets a little bit out of control... turns out these things don't brake too well. It's a super fun cutscene, but we'll keep it as a surprise for the next update :)

What I will show you however is a conversation I’ve animated this week. We usually don’t show many conversations, but this one is different. There have been encounters in the past, Remi’s Johnny Bolton for instance, where the conversation system alone didn’t cut it. When the dialogue tells a story that’s more specific, or when there’s more action going on, conversation assets have their limits. In that situation, we use the same talking animation bank but we import them directly into Motionbuilder, our animation software. From there, once we’re happy with the dialogue, we can add layers of details, corrections or even straight up “from scratch” animation sequences.

In this scene, we show a lady reporter making a scene at two rather unimpressed doctors, using the techniques I wrote about. See if you notice the difference with animations you might be familiar with!

Following on last week, encounter animation continues. In one of them, reporters frantically write insightful articles (about the new Joy coconut flavour apparently, can’t blame them, coconut rocks, especially with pineapple and rum... don’t drink and drive). They have a few variations, transitions and they sometime stop to drink a cup of well deserved coffee! Here’s a peek:

Apart from this delightful adventure I went through some conversations between two terrible heirs (that you can spy on through windows), as well as others between Arthur and an old dying soldier. Also prepared some scenes for our new remote animator Mark to start working soon, and continued on the giant robot I showed you last week. Busy busy.

I have been “working” on the story mode, which I can’t say much about. But I can say it’s going a lot smoother than we were originally anticipating. I’ve blocked in 3 quests so far this week. I’ve also been fixing some bugs and plugging in new stuff for the underground encounters.

Woo, back on making new stuff this sprint. Last month was all bug fixing old encounters. Old encounters in which I may or may not have stuffed in some secrets or new things. We’ll see. You never know. :o

Blocked in a test encounter for something I don’t think I can talk about, but the rest of my week has been working on the first underground level with Guillaume, and JR. Unnngghh... the animation JR made was so sexy. Just wait. Think it’s going to be pretty sweet when it’s done. In the meantime you might want to practice throwing corpses until it ships. :)

This week, I've yet again been working on a lot of different things. Monday, I created a new backlit panel with light bulbs to indicate the underground stations. Tuesday, I did some cloth simulation, added flower paintings to the reporter's house, created a crate variant that is painted red for lootable objects, did some level adjustments for animation and started adding decorators to the street arches in the village. For the rest of the week, I put all my efforts into creating the 2nd old soldier's house. To do a house in a roughly two days is quite a challenge, but I was surprised with what I was able to come up with with the little time I had. 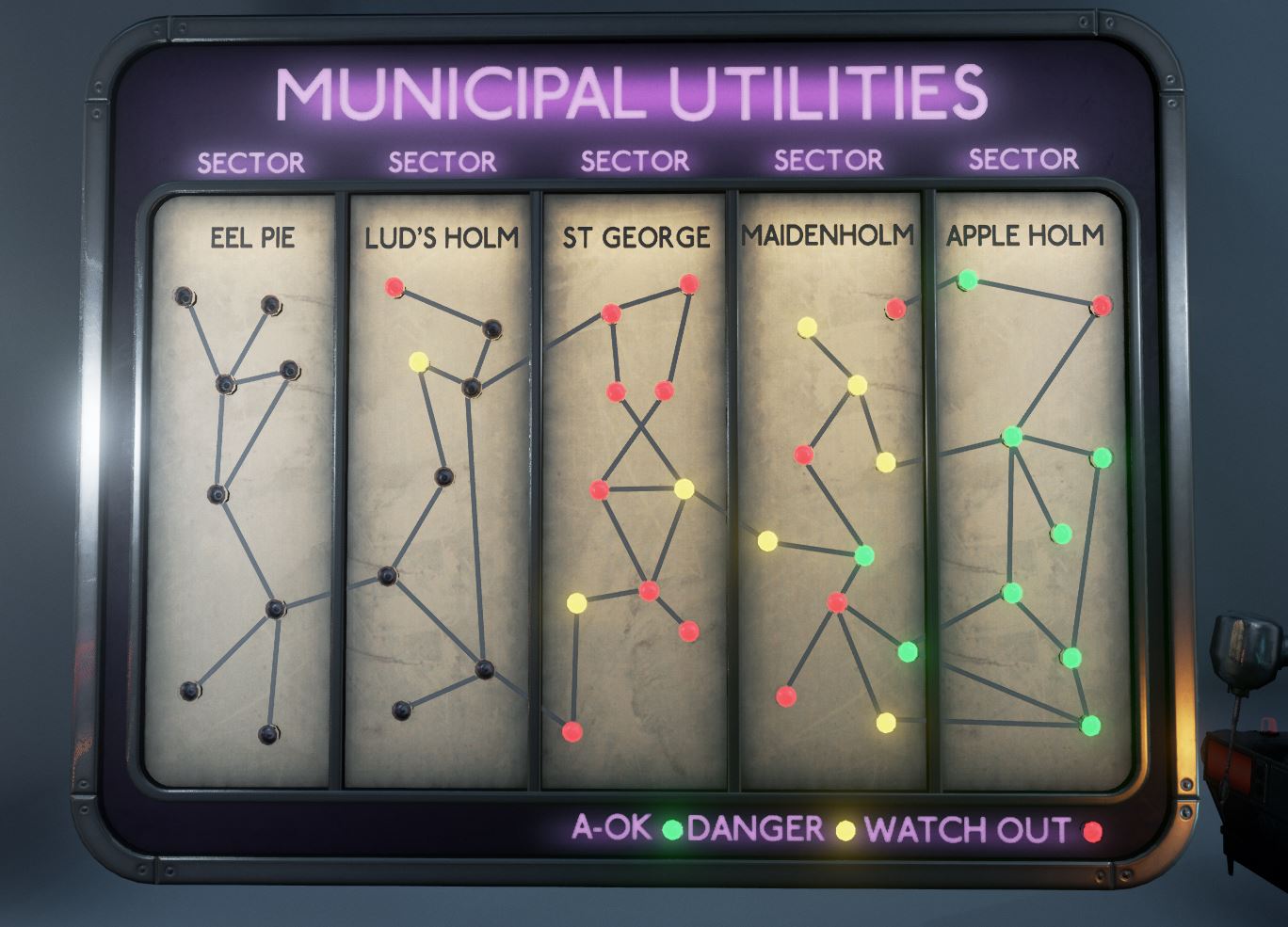 This week we added some animations into the inventory screen to continue trying to make it the most exciting part of the game. In the future, people will use “too busy having fun playing with We Happy Few’s inventory screen” as an excuse for missing work, and it will be accepted, and they will be given a raise.

Anyway, it’s really starting to look good now. Now that it is fully functional, I’ve been playing through the game with it to try and find improvements that can be added and bugs that can be fixed.

Here’s what my testbed looks like. It’s messy, but I spend so much time there it’s like home. Sometimes I’m sure Mrs. Stokes is looking at me: 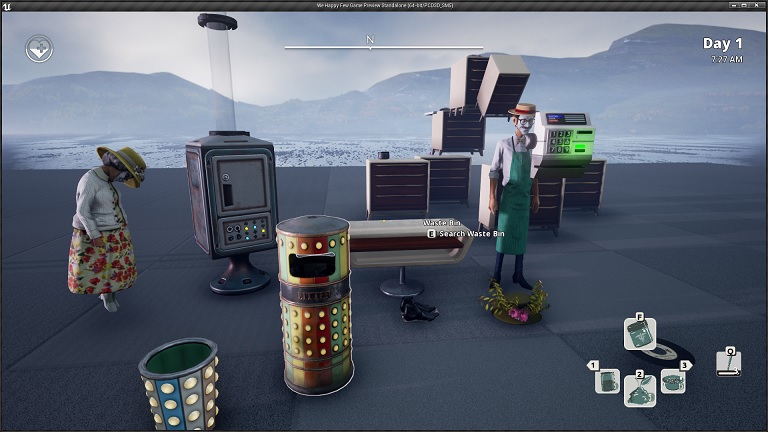