This week we launched the Maidenholm Update on Steam and GOG! In case you missed it, here is the update video, and the patch notes are available here.

The Xbox One version still needs a bit more time. With the introduction of the new content, we’ve had to rework our loading and streaming systems, which is a non-trivial task. The good news is, the work we’re doing now will make it faster to create updates in the future. As soon as the update is ready on Xbox One, we will let you know!

We also released earlier today a hotfix for the Maidenholm Update which should address crash and performance issues. If you have been experiencing these, make sure you are playing on version 38678 (the latest one). Thank you all for letting us know about your issues and sending us your logs, they have been very helpful in narrowing down the issues. The game might still experience some problems, so feel free to let us know and we will keep on working on hotfixes.

Hi folks! I hope you are all enjoying the Maidenholm Update.

Today I’m going to talk about something that causes immense boredom in most people, but makes me super happy: production pipelines!

One of my responsibilities is to look after how the team works together to create our updates.

First, we begin by planning what’s going to be in an update. This begins with David’s (our design director) design, and gets built out into a gigantic planning spreadsheet:

These are some of the encounters we created for the Maidenholm Update. X means done, and a gap can mean we have more work to do on it (in this case we want to do more work on the digging spots in a later update). Also note that these are dev names - the names you see in game are what they become after Alex has his way with them. We look primarily at encounters because these are the critical path for an update, and they require ~80% of the team to work together.

You can see here that we have a ton of columns referring to the different parts of each encounter. We generally have one level designer, one artist, and one animator who look after any individual encounter. We also have Alex and Lisa working on environmental narrative and VO, Sarah on all the 2D art, Valentino and Chris on our sound, Weili (who you’ve probably never heard of) working on VFX, David checking in on the design at all times, Whitney looking after the overall look, QA testing for logic, save/load issues, stuck bugs, etc, Matt and the programmers looking after everything working correctly, and me making sure that people aren’t blocked on what they need to do. All in all, it’s quite complex.

Over time, our production has evolved into this:

Each column refers to a 4 week “sprint”, and we have 3 of these per update. Each sprint represents a different phase of development, and each team has different focuses inside each phase. We’re currently at the end of phase 1 for the next update. This helps a great deal when we’re planning the overall production, for example, if art isn’t needed on update content in a sprint, they can work on story content.

While we’re not a super agile team compared to pure software development, because we have an overall plan/design we’re working towards, this system makes it easy for everyone to understand when we’ll be doing a certain thing. It’s easy for us to respond to player feedback – eg by fixing/improving encounters in phase 2 – and also bring new content in an efficient way. \ As you may expect, it isn’t always as clean as these charts make it out to be. But having the process and being flexible is much better than not having one!

I’ve been writing encounter dialog this week. Yards and yards of it. When we started this game, we had no idea how much dialog was going to go into it. The first few encounters had very little. But you guys seem to like run-ins with strange people. So I just finished an encounter with 180 lines of dialog. Can’t tell you what it is, but if you liked the rat piñata, you’re going to love it.

Update week yaay! I have been watching a lot of streams and youtube videos, it is amazing! But well as I promised last week, I finished my big prop and did two more. I won't tell for what these props are for, but I can tell you that David and Whitney are behind this crazy idea and guys, I gotta tell you, their imagination has no limits. Hope you like them and if you have any guesses on what the props are for, let us know! 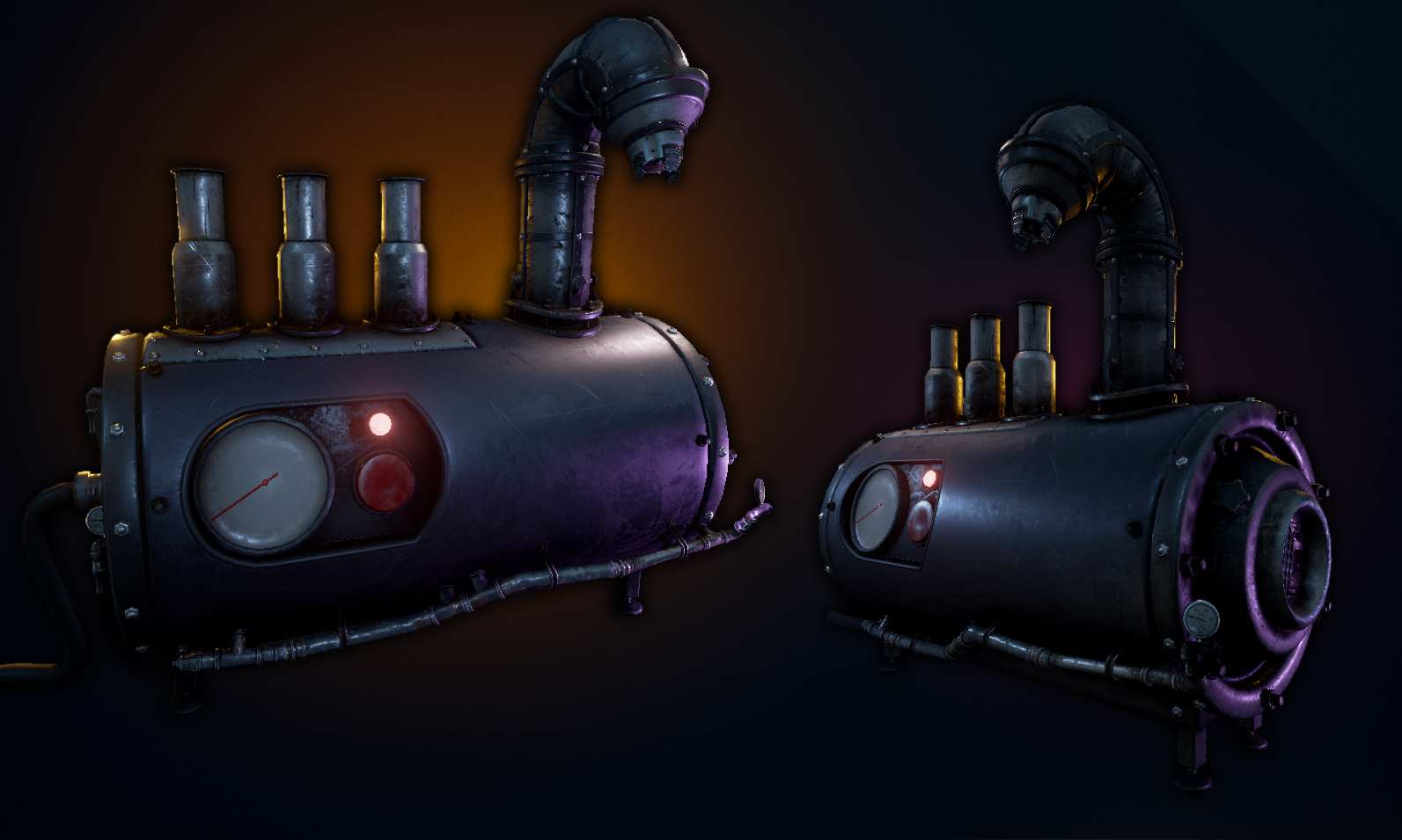 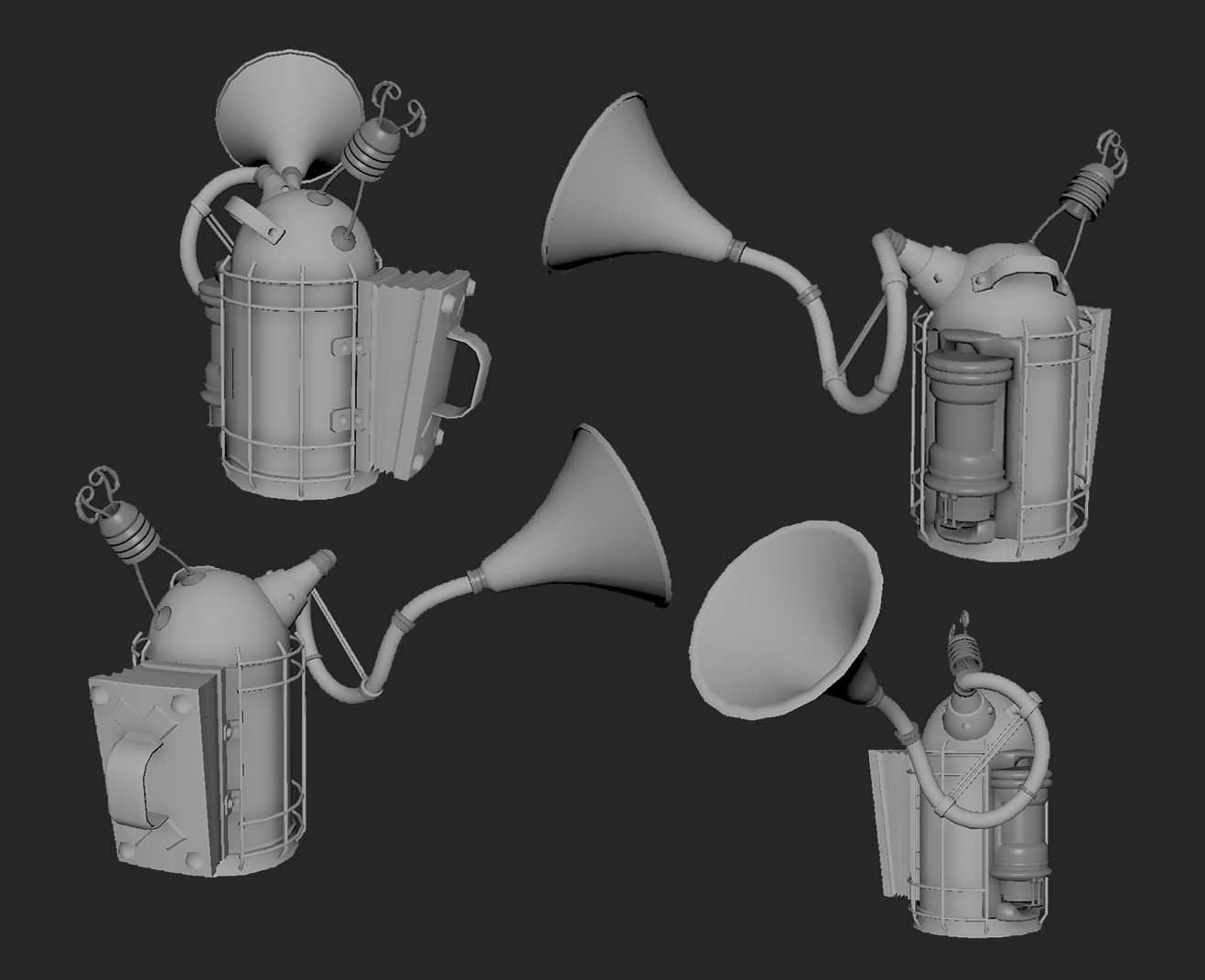 These past few weeks I’ve been working on props (objects). It had been a while since I had done so much modeling and it is really cool to get back into it. Notably, I’ve been working on very special machines, one of which is called “The exsanguinator”. I’ll let you figure out what this one is used for. ;) I also worked on a wheelchair and a silver welding exhaust ducting pipe (yes, it’s the true name of the thing). 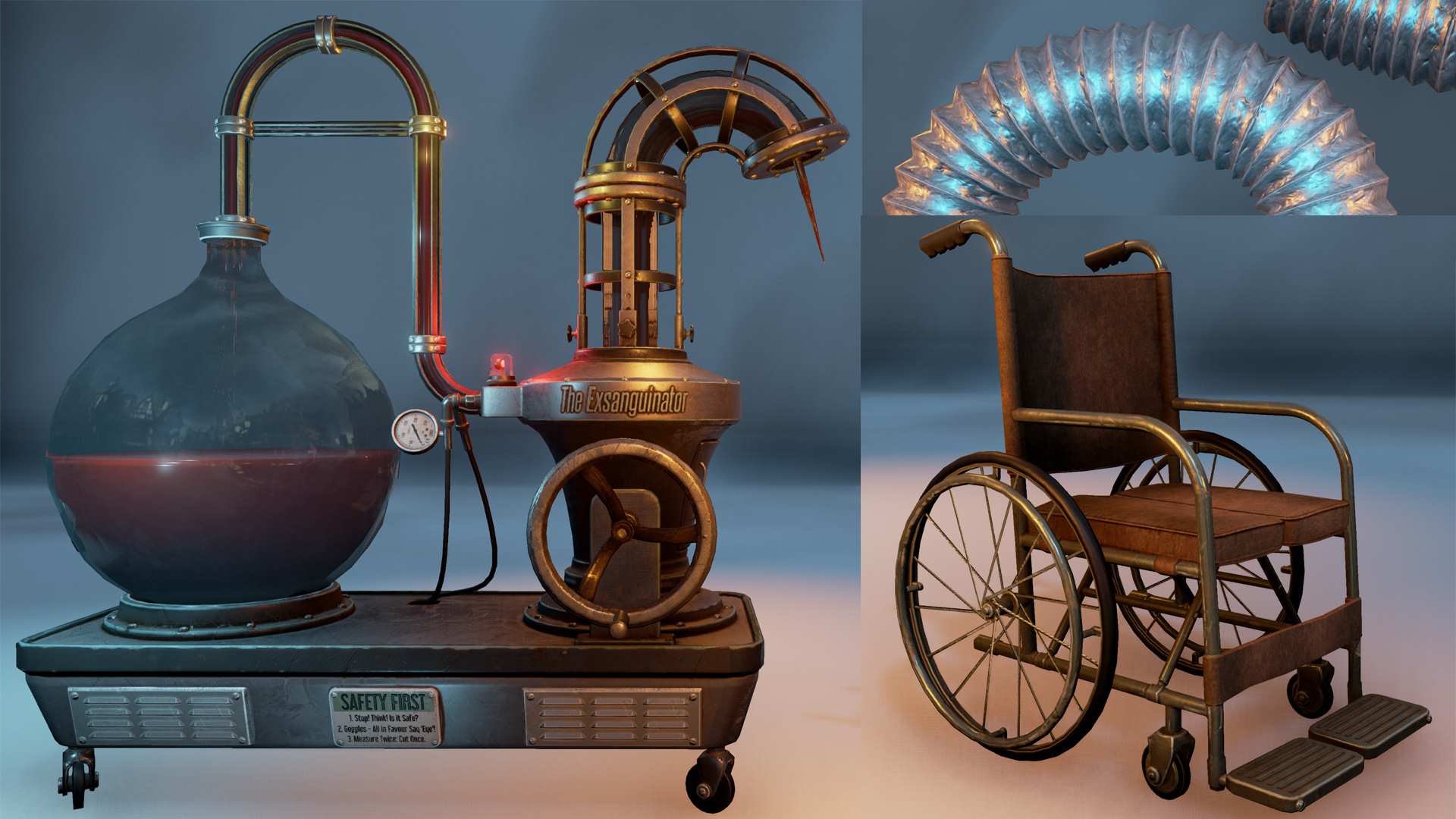 This week I did exactly what Whitney told me to do and so I did great things! They were a lot of back and forth between concepts and modelling and the final result ended up just as planed and faster than expected. The statistics conjunction of the retroactive signal estimation determined that the creation curve is strong. 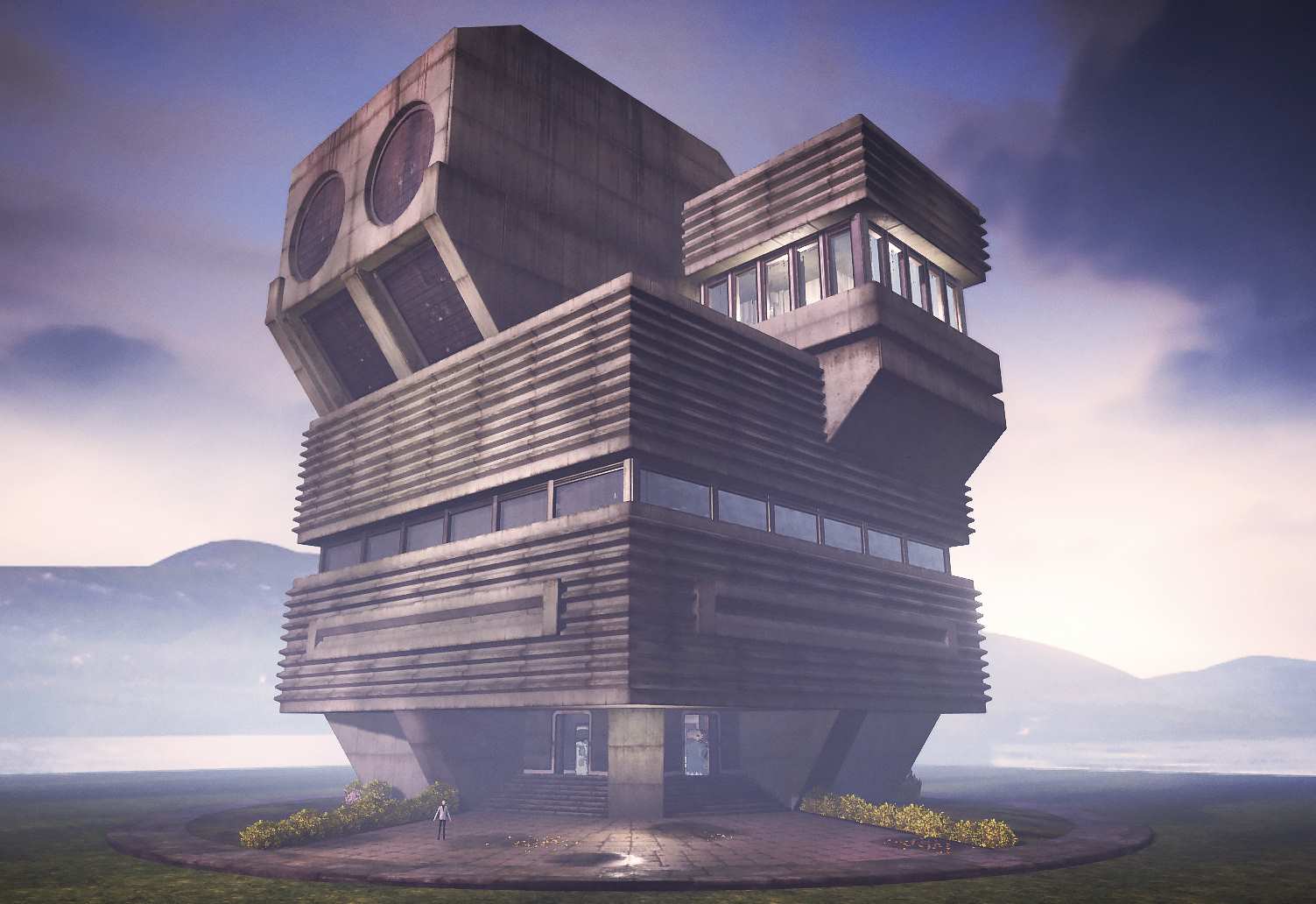 A lot of excitement this week, stomping out as many bugs as possible before seeing the new update out the door.

For most of the week I have been looking into the inventory UI overhaul. I’m working on the code side of the player menu makeover. Hopefully it will be even prettier to look at, and have a bit more life to it to. There could also be some gameplay improvements in the way the player gathers and uses their items.

Hey everyone, this week was pretty much the continuation of last week. I finished the whole 91 FaceFX actors! That was more painful than I expected… I’m still waiting on some audio renaming stuff before I can start generating all the animations, but it’s mostly done. For the rest of the week, I was able to do something EVERYONE wanted: First person arms variants!

We’ve had lots and lots of comments and requests from the community to change the visual of Arthur’s clothes when we switch suits. And I am proud to say that it will happen. Our great character modeler, Tito, has been creating all the clothes variants for a few weeks already, and I finally got to the part of rigging the first ones. We are still missing some of the models like the padded suit, spikey suit. But the work has begun! This will add a lot to the immersion and I am very excited for you to experience it for the first time once the next update comes out. Until then, here’s a few screenshots for the hype:

Been fun watching you guys break my quests in every possible way. Thank you for that. I’ll be fixing all that stuff for patches at a later date. In the meantime, I’m going to take a bit of a breather (with Antoine) on weekly updates, as we work quietly in the background on the story playthroughs.

Had a lot of fun this week working on some new encounters, I got to actually build some new houses for Wellington Wells, a task I really enjoy doing… For me, it’s kind of the best of both worlds--as far as a task goes, it is without a doubt design, but it also has that element of architecture/art to it, which is something I enjoy.

One of the encounters that I’m working on is part of a series of Reporter encounters, so it’s always interesting to watch as the whole bit comes together to form a part of the narrative.

The other encounter I’ve been working on takes place in two separate locations, and as much as I hate to say it, working on this encounter has revealed that there are some seriously disturbing and horrible people that live in Wellington Wells—if you had any hesitations about choking out a Wellie, after playing this encounter, you’ll find yourself relishing the thought, and you’ll know exactly who deserves it most.

So much fun… have a pic… Enjoy your weekend! 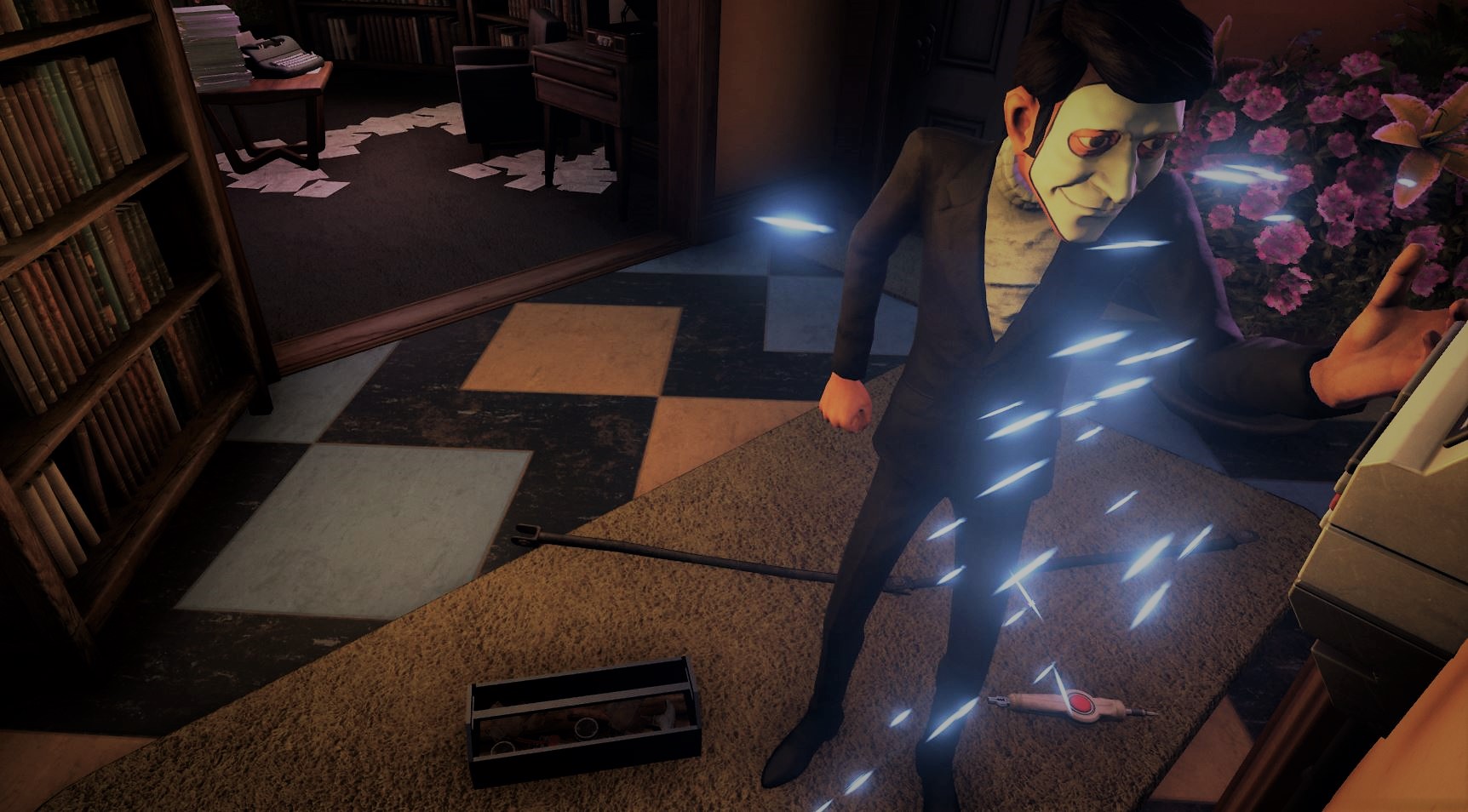